I had this idea to use string, masking tape, and dry erase markers so the students could explore reference triangles for the first time. I had a bunch of embroidery thread left over, so I gathered supplies: 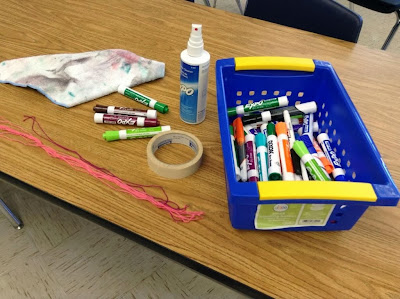 I had my kids rip off a piece of masking tape and poke a hole through it to thread the string through then tape it to the desk. We discussed spacing issues and such, and they drew circles (eventually they were happy with them after a few erasings). 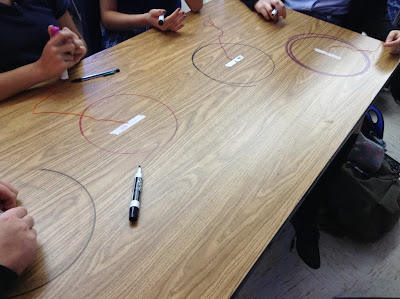 Then they drew the xy-plane with the origin at the center of the circle. (OCD note: do you SEEEEEE the pen with the cap off! It's drying out, people. CAP THE PEN!)

Then I had them get out their scientific calculators that I had them buy, and we explored sin(20), sin(380), sin(-340) and they noticed things. We then did (on the calculator) sin(160) and sin(-200). They discussed why the values were the same. Then they started moving the string around the circle. 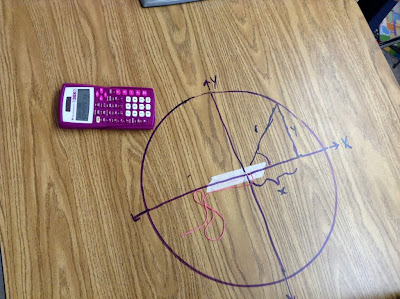 We talked about how it didn't matter how you got there, you still got the same reference triangle (which I kept defining and bringing up) .... no notes yet. We talked about x, y, and r. We explored when the sine/cosine may be negative. I had them draw some more using their fingers and string and dropping of the perpendicular as references for their pens: 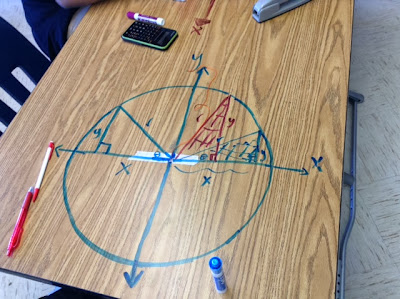 We explored when the sine value would get bigger and why.

THEN we went to notes: 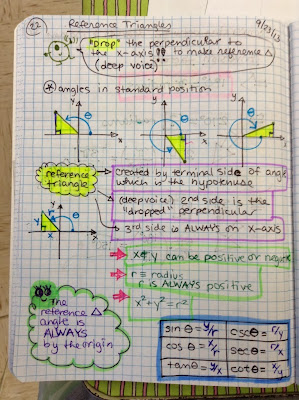 I think they liked the novelty of drawing on the desks. Hopefully, the tactile aspect of creating the reference triangles will stick in their heads.
Posted by Shireen Dadmehr at 9:49 PM