I was reading my "O" magazine this morning on the treadmill, and an article by Sarah Beauchamp struck a nerve (can that happen in a good way?) ... maybe it's better to say the article "spoke to me" ... (not as in "hey, chubby, set the pace a little quicker on the treadmill", but as in "what a great idea you're reading about"). It was called "The Five-Moment Memoir". In it she wrote about how every day she committed herself to sifting through the highs and lows of her day and recording in her journal 5 moments of that day.

* Got a great idea while walk/jogging on the treadmill this morning in my on-going effort to be healthy and fit and strong.

* Had a funny conversation with a great student P. who for some reason I pretend to her face that she's evil and then she smirks her knowing smile at the joke and maybe banters back with a witty rejoinder.

* Had success in APCS with this in-class assignment that I pulled together last minute (like most days ... the "last minute" ... NOT the "success"), and students who otherwise are lost in class and cheat and such were calling me over to check their answers, and I put their work on the document camera as a "key" while saying whose paper it was:

* For once had NO students stay after school for tutoring, so I enjoyed some surprise free time to prep for the next day.

* Finally found a good book to read from the school library, and enjoyed a few minutes of relaxation in the evening enjoying each page.
Posted by Shireen Dadmehr at 9:16 PM 3 comments:

When my students came back from break, I knew they would start back on that cycle of school/lack of sleep/stress. I made one of my first assignments a "make a ceiling poster that gives advice on how to reduce stress". I gave them stock paper, and here are a few results. Yes, there were "last minute bad" ones, but mostly they were this creative. For the last few weeks, I see various students in all my classes gazing at the ceiling. Free eye-candy. 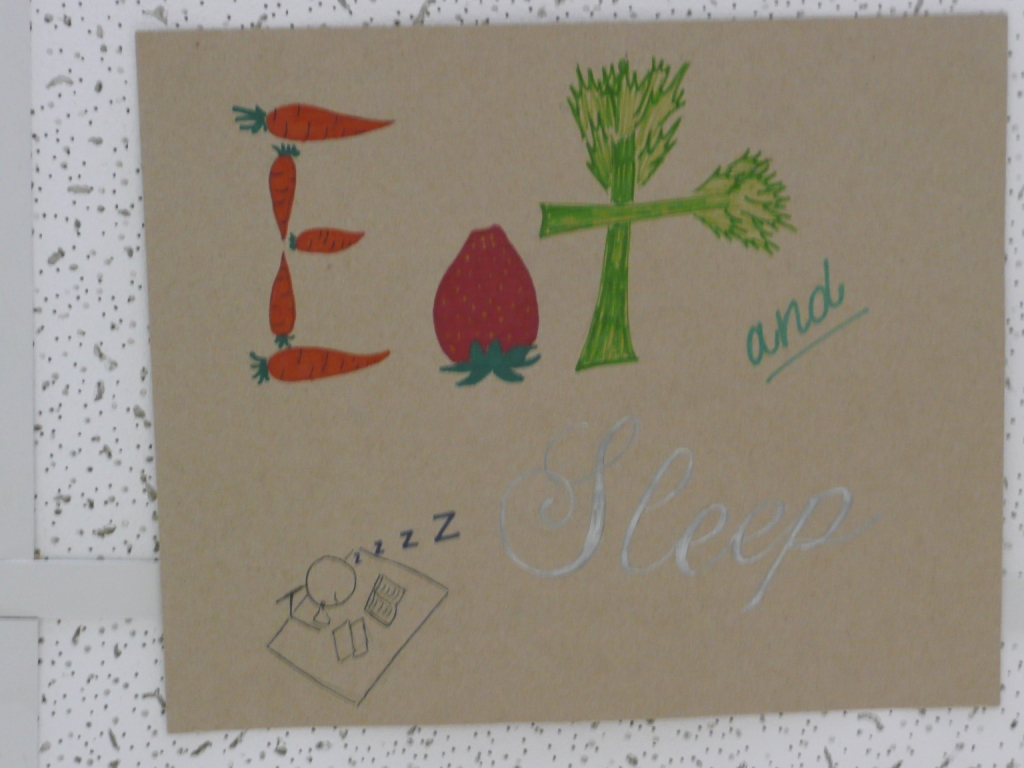 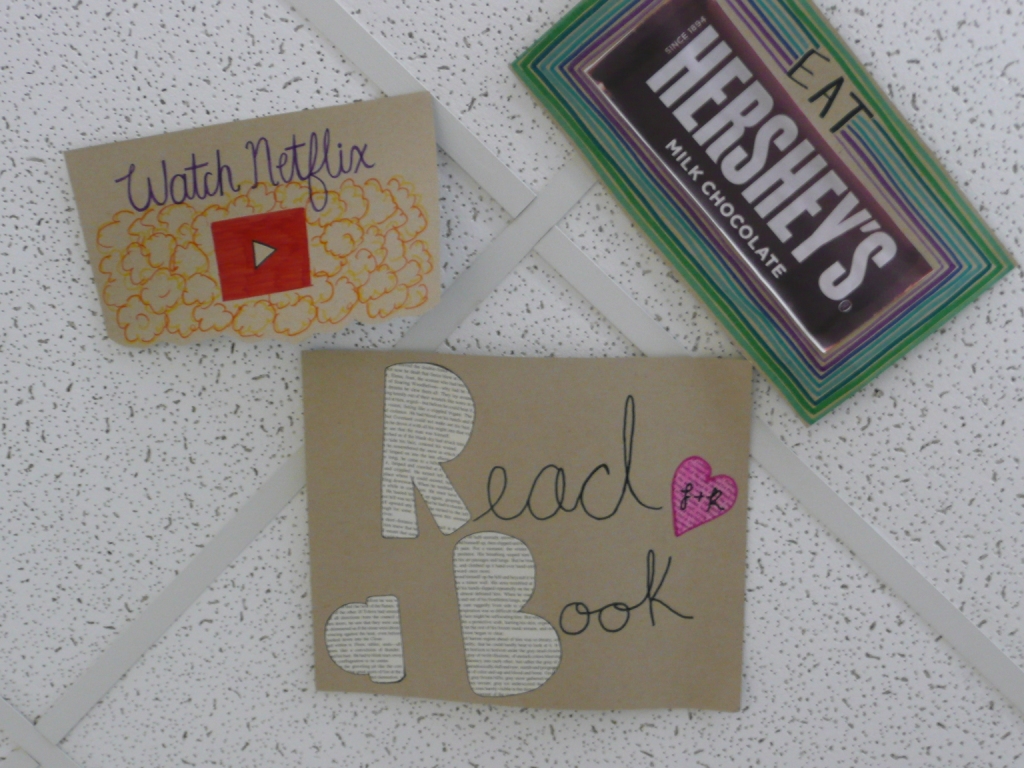 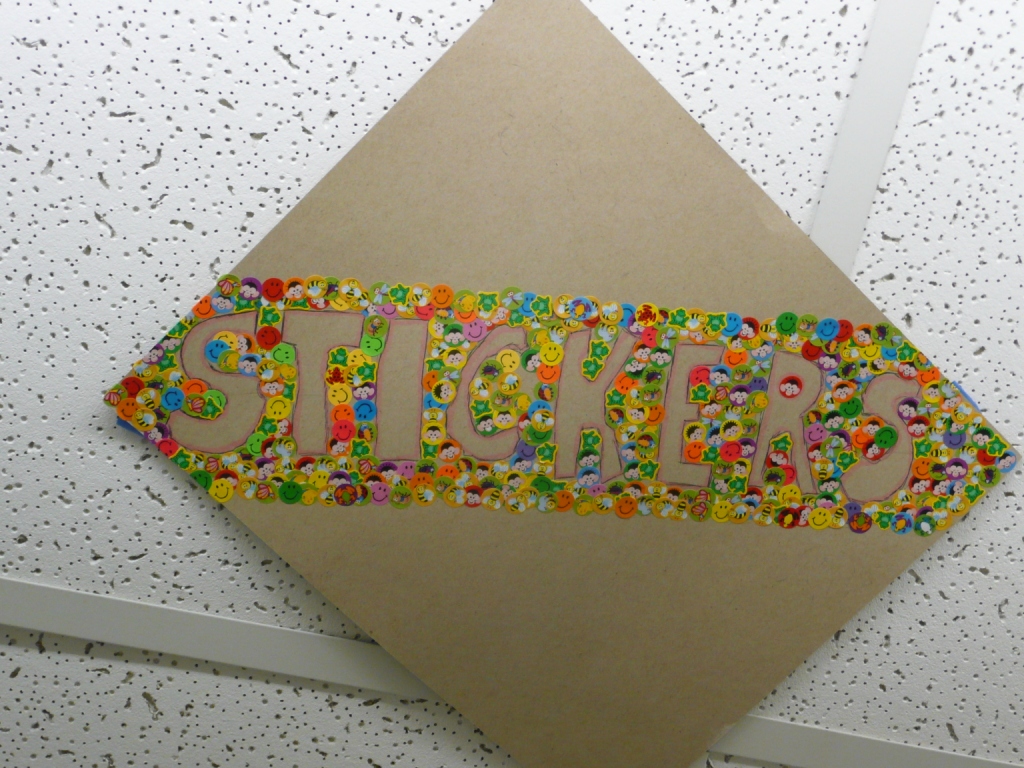 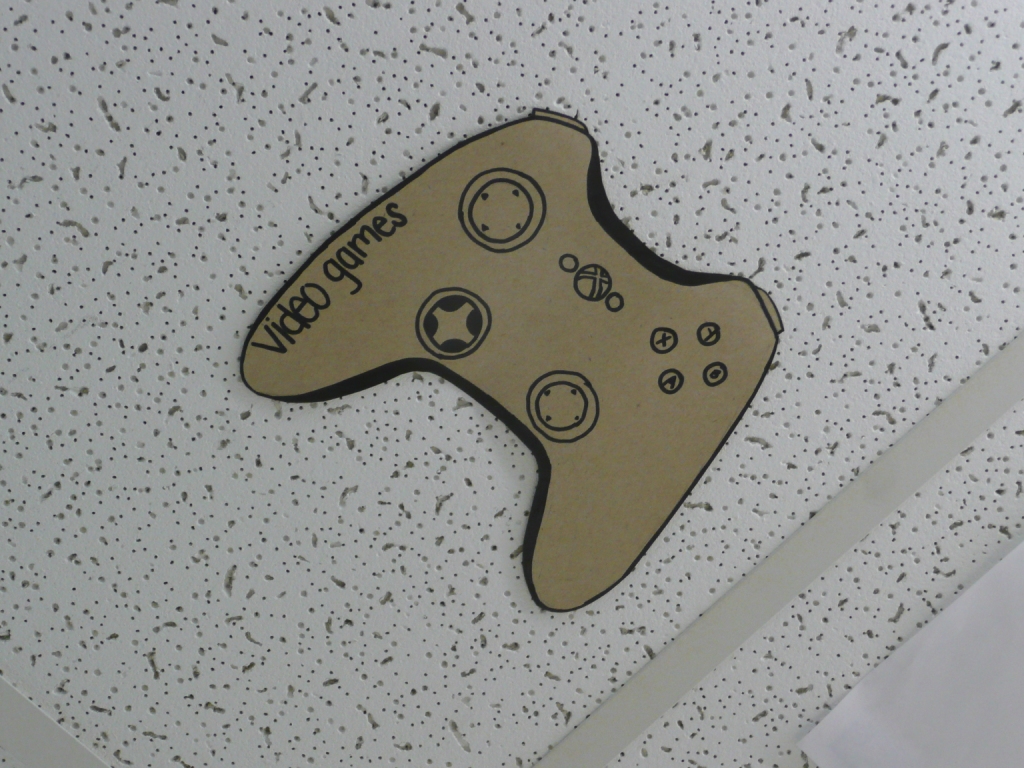 I recently realized that it's almost that time again in Geometry: TRIG. And with trigonometry comes shadow problems .... and by problems I mean the math kind and the understanding kind. I wrote last year about the fact that something I took for granted (knowing how shadows work) is not necessarily in my students' skill set. In fact, with my new crop of cute little 9th (and 2 8th) graders, I posed the following "pre problem" the other day in class:

1. In your notebooks, draw a line representing the ground.
2. Then draw a stick figure that is you somewhere about a third of the way in from the edge.
3. Then draw a sun high up away from you.
4. Now, draw your shadow as accurately as you can based on 1-3, and draw extra markings on your paper that convince me of what your planning process was.

Then I walked around and just glanced at their papers without saying "yay" or "nay". In my brief pass around the room, I saw all sorts of correct and incorrect thinking.

So, we just had a 3-day weekend, and before it, I assigned the following "project" to them (as a precursor to what they'll need to know later):

Every hour on the hour that the sun is up, measure your shadow as accurately as you can and jot down the time and the length. They then brainstormed, and we shared out ways to do this if you don't have a ruler or such. Then I asked them to jot down some things they thought may happen (to look at later).  I told them I was going to do the homework, too.

I haven't had them back in class yet, but I already know some changes I'd possibly make to the assignment for next time: It doesn't necessarily have to be ON the hour, but record the exact time you do it once every hour. Also, a kid had an interesting idea: stand in the same spot and notice the position change in your shadow (seems cool, but it would negate the way I measured my shadow). Coordinate with another geometry class at a different latitude and or "place" in their time zone and see what the differences are (if any) for "same heighted" people.

Anyway, I'm curious what they come back with, and if they've learned anything. I'll have to have some follow up questions and follow up drawings to assess. My plan is to get all the data on a spreadsheet and see what the function looks like. I'm guessing since they probably all fudged the times it will be wonky. I'm also curious what will happen when we get to problems such as:

We started our Special Quadrilaterals Unit the other day, and parallelograms were our opening act. Last fall, I found large, 250 straw, $1 each bags of pretty colored straws, and I had an inkling that I could use them for geometry. My original idea was to use them later on for the 3D units when I was talking about edges and vertices and faces and such. BUT.

I was playing around with cutting off pairs of congruent straws and putting them together. I had extra resistors hanging around (resisting the trash can, ar ar ar), and I made this: 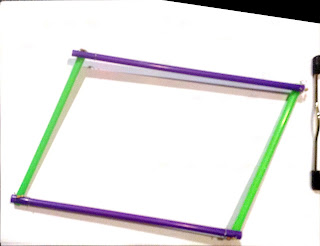 that can be squished to this: 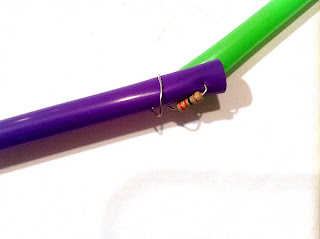 My vision is that they can keep bringing this to class, and we can continue to reinforce the properties, and they can MAYBE not mix up rectangle/rhombus/parallelogram/etc. properties.

My coworker had the brilliant idea that then we could use spaghetti for the diagonal investigations.

This was their homework:

Sayonara Vacation ... It's Been Fun

And so it ends ... sleeping enough ... lounging around and reading books ... doing puzzles .... thinking about teaching and what to change/fix/keep/do next semester ... not-enough-movies ... lots of visits with friends ... All sorts of vacation goodness (well, except for the lack of good matinee-going opportunities).

I played around with making videos for TeacherTube for my computer programming class. I like the fact that they review the uploaded videos first before they allow them to be activated. I don't like the ads that are shown on the videos, but I guess it's a necessary evil. I do like that you can skip the ads after 5 seconds or so.

I'm trying to improve my Haiku website for the APCS class, and I was including links to various topics. I couldn't find short, to-the-point videos of what I wanted, though, so I made some. Let's see if I can keep it up. I also had a hard time finding enough resources for QUICK, easy-to-read sites on the specifics of Java programming. For some topics, there are great things I've found, but for others, I guess I have to search a bit harder. We do have a textbook, but I don't like the style. Sheesh. Picky, picky. Oh well, it's fun scanning things and seeing how others do stuff and picking and choosing what I want to create. And as ever, always feeling like I'm not going fast enough, and we're not going to cover all the AP stuff, and they're not going to understand stuff deep enough. Oy! I guess that's the plight of the first year you teach a class.

I have one "non mathy" assignment I'm going to give my seniors the first day we get back. It's their Spring semester, and they're seniors, and as a school, we're piling some more things on them, and I know they're going to be stressed. I've also noticed that the Ambigrams my geometry kids made last semester that they put on the classroom ceiling tiles STILL have various students looking up at them. So. I'm going to give each of my seniors (well juniors and seniors because it's in one class), a 12x12 card stock sheet and they have to decorate it and give one idea on stress relief. Something that's quick to do or something they've found effective or what not. I'll put some other requirements on it, but that will maybe be some source of help to other kidlets when they get overwhelmed in the next few months. Or .... I'll just have a nicer ceiling to stare up at myself. Win Win.
Posted by Shireen Dadmehr at 5:19 PM 1 comment: