We started out unit on polyhedrons this week, and are learning first about volumes and surface areas of prisms. I know they've worked out volume and surface area with a vengeance in middle school, but I know they didn't do the "hard" problems. With all this in mind, I started with the information that is shown in "Discovering Geometry" about how the lattices of different substances that are made up of the same elements (carbon) can have way different properties (diamonds vs. graphite), and can behave counter intuitively (water expands when frozen and other things don't).

Then, instead of giving them definition upon definition to copy down (edge, vertex, lateral face...), I handed them 2 blue sheets, and we had a race of cutting out the squares (otherwise, la la la, I'll take my own sweet time to trim VERY neatly and NEVER get done). Then they had to match the cards. I didn't answer any questions (what's oblique mean?), and just said that they should use process of elimination. And, "why are there more than one hexagonal prism cards?" .... you'll figure it out. Here are the sheets. (note: for some reason, the "preview" on box.net comes out all wonky formatted, but it downloads nicely. I'm not sure why that happens.) 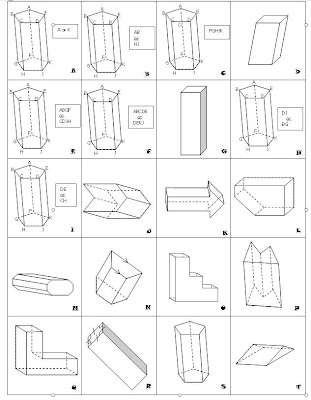 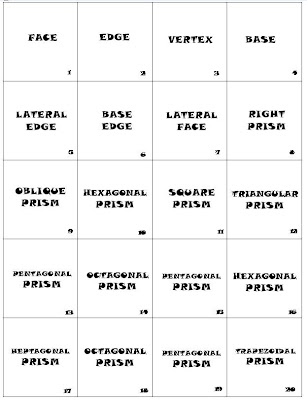 At the end, I gave them a key and let them keep these to put in a plastic baggy. I plan to do the same with pyramids, cones, cylinders, on different color paper. I also made sure we had a discussion about correctly describing right and oblique prisms.
Posted by Shireen Dadmehr at 7:56 AM 2 comments:

Ways of Asking For Things

A student came in after school concerned about her algebra 1 grade. This 6 weeks, she was absent for maybe 2 days in one stretch, and then she basically never got back up to speed turning her in stuff (in any of her classes). Then, thank goodness for good parenting, she's now concerned about her grade because her birthday is coming up soon, and if her grades are stinky, well mom won't be too much in the birthday mood.

Now I just have to laugh. I asked her why she hadn't done the work. "Well I didn't get it, so I thought I'd just turn it in for some credit (2 of 8 problems)". Then I asked why she hadn't come for tutoring. "Well .... excuse, excuse, excuse". Then I quickly disabused her of her air quotes and said, "hopefully you'll be in school for another 7 years (she's a freshman), and you'll have many teachers. Most likely when you're asking them for a favor, it probably won't do too well if you just come with an attitude, and ESPECIALLY if it looks like you're not even interested in learning the material. A better thing would be to say, 'well, it may be too late to turn this in, but can I still have help on knowing how it's done, and I can practice'".

So somehow, magically she could stay for tutoring on the spot, and we worked through some of the problems. She was a quick learner and showed improvement. Her funny statement then was, "why do I get it when I'm working here with you (she's NEVER been to tutoring), and I can't get it at home?". I asked if she was distracted at home when she was doing her homework. BINGO. "Well, I guess so, but don't tell my mom." We discussed that math was hard, and you had to think about things as you were doing them, and not just half pay attention to your homework.

Maybe she's seen a wee bit of light? Or .... most likely, this is the upswing of the see-saw that is a teenager's personality .... and her birthday incentive will be gone soon. ... I'll take what I can get.
Posted by Shireen Dadmehr at 9:03 PM 2 comments:

I remember how in the past someone had mentioned to me, "Students like routine. They want to have a sense of comfort of what to expect and such." I don't remember the context of the conversation, but I was thinking about it over break. I apparently like routine, too.

Break's all well and good - I slept about 8 or 9 hours every night, delicious; I got to go to bookstores during the day and browse and come upon great new books to read (hello, "Little Bee"). I went rollerblading 3 times in the afternoons (goodbye fish-white pallor ... almost), etc. But. I miss my routines. I missed my 2 favorite yoga classes for various reasons; tap dance class follows the school schedule, so it was canceled. I didn't run at 5am MWF, well, because, who in their right mind would get up at 5am if they didn't have to, I miss my Thursday morning treat of having breakfast out at a 24-hour diner before school and reading the paper and doing the puzzles. I miss the free exercise of being on the go all day and not having easy access to my refrigerator (hello tighter pants).

Waa waa waa. All that is to say, that though I won't like the stress, I'll be happy to go back on Monday and get back to my well-tuned-and-familiar routine. Then pretty soon I can start my finger countdown of weeks until summer .... and then I have to find other ways to resist the fridge and the sitting all day.
Posted by Shireen Dadmehr at 8:40 PM No comments:

A key point of chapter 2 of the differentiation book I'm reading is that you can differentiate in one of 3 areas:
* content
* process
* product

Her examples are not from math classes (wait! there's one at the end of the chapter), so I have to brainstorm about how to differentiate content. Let's say I'm teaching solving inequalities in 2 variables. Maybe a content differentiation would be to have separate groups of kids: one with basic line inequalities (y=mx+b set-up), one with point-slope inequalities, and one with standard, point-slope, and basic all mixed. Or maybe a group with line equations given where there is some thinking involved to graph the line (the y-intercept is not an integer, or the "easy" point is off the grid I've given them). So then my thinking goes to: when do I separate them into groups? At the outset? After my initial spiel? After a day together? How do I gather them back at the end of class and make sure they learned? Do they have an opportunity to advance to another level if they mastered the basic ones? Is there enough time, or will we move on to the next topic?

Continuing on with the same example for process differentiation: this would be how they're originally learning the information (among other things). Maybe they could listen to me speak, or separate off and learn from the book, or maybe I have a sheet pre-typed out that goes through the process and prompts them to learn the concept.

For the product differentiation: hmmm, this always smacks of "project" to me, and I know it shouldn't. If I get away from a paper and pencil test, how will I allot the time to assess them orally or in other ways? How will I stop from giving them hints either with my body language or with actual words? How do I know they really know the material?

She does discuss starting your differentiating small and adding to your bag of tricks each year.

Let me practice writing my name. All over the paper. Curly, squirrely, poorly Q's. First and last name. Oops, ran out of time to complete many problems.

Week-long note on the board: TEST! solving by elimination, solving systems of inequalities, graphing inequalities in two variables. This was not code for DON'T STUDY.

Earnest note at the bottom of a half blank test, "do not understand this part. will come in for tutoring on Friday."

Many practice problems involved integers. Or. GASP. Minor fractions. One Half. GASP GASP. Negative one half.

Checking Your Answer. Outrageous. Don't Fall For It. She's Tricking You Into Doing Needless Work. Mwa ha ha, Teacher Lady. I will NOT be fooled!
Posted by Shireen Dadmehr at 6:38 PM 5 comments:

I started thinking that is would be convenient to have some blank "joke sheets" ready to make a quick practice assignments for various math skills. I took my last geometry sheet and reworked it so that it's ready for a quick altering. In this one, I guess I'd have to find 12 problems that each have 2 parts, or I ask 2 different things, since there's an a and a b component. I guess I could easily rework it to make 24 problems, but I would have to reformat it. Let's see if it works.

Here's the downloadable version. And here's what it looks like: 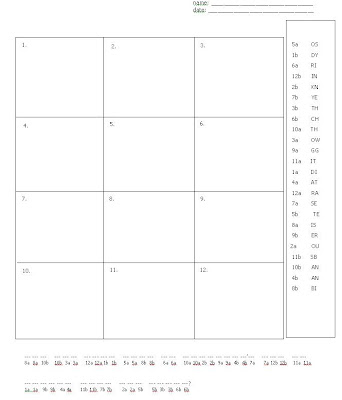 Some things I've come away with on my geometry project:

* Even if you don't get around to grading them immediately (say in a week or so), glance through them all and count them. If any students haven't turned the project in, notify them and their parents. I had one child inSIST she turned it in 1 day late in my mailbox - swearing up and down to her parents. I never saw the project. Luckily, the parents were supportive, and the child is turning it in WAY late, but turning it in .... well I say that, it's supposed to be tomorrow. We'll see.

* I like the "wow factor" component. I purposely left it vague, and just said, "wow me", and not everyone, but MANY students went beyond what I would have imagined.

* Put EVERY child's poster up if you're going to hang them .... and don't put them up in waves, do it all at once, or you'll hear about it.

* Don't assume they know how to draw "tilted rectangles" on a coordinate plane. Some just eyeballed the 90 degree angle, and didn't use slopes to force the 90 degrees.

Other than that .... spring break after tomorrow. Woo HOOOOOO. Sleep at last and movies and books and more sleep. I've also assigned a "castle project" to my IED (engineering class), and I have to build my castle on the Inventor program over break since I told them I'd do the project with them. ... Just got home from "Alice in Wonderland". Phenomenal. The creativity of people is very inspiring. It makes me want to go meditate and ponder on doing all sorts of fantastic things. The sky is apparently not the limit.
Posted by Shireen Dadmehr at 9:33 PM 1 comment:

We just finished our unit on inequalities, and my students have a test next class. I'm thinking of putting the following question on it to gauge their understanding of what the solution graph really indicates. (sorry can't figure out a nice way to embed the document directly onto this page ... does anyone have a tried and true method?)

LATER: Thanks to a wonderful commenter, I learned a new skill of "screen shots" (after I asked him how to do it ... and then thought of "Google University"): 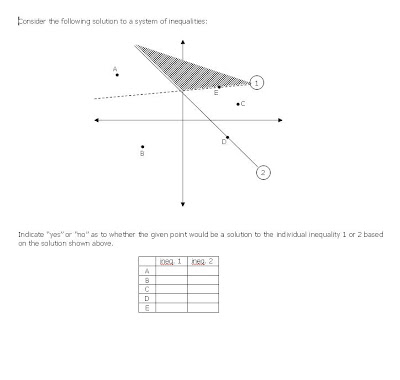 Posted by Shireen Dadmehr at 5:21 AM 4 comments:

We are just finishing up trigonometry and special triangles in geometry and moving on to areas, but as with all skills, they need to revisit the topic a few times. Here's a sheet I made up that I'll be giving my students next week.

EDITED LATER TO ADD: Well, after I made the sheet, I thought about how much I like the puzzle sheets with answer banks, so I improved it to make the following puzzle geometry sheet.
Posted by Shireen Dadmehr at 10:23 PM 7 comments: