I was sad after choice sheets went out and came back for next year, and only 3 people had signed up for AP Computer Science. I had tried to send out enticing "see what we do in here" types of e-mail about 3 times this year to show the projects and stuff. Alas, to no avail.

Then during the CS workshop in Denver, I kept hearing about how everyone ACTIVELY recruited students, and how students HAD to feel individually welcomed. You may make a broad statement to the whole group, "Yes, you can do it. You are WELCOME in class." , but there will be students thinking, "She can't mean me."

So this past weekend, I looked at the choice sheets and found students that I thought had potential to really enjoy and succeed in the class. I sent personalized e-mails to each one. Here's a version of the e-mail (and p.s. In the 2 days since, I've had at least 15 students say yes to CS next year.):

I hear that you have signed up for an online course as an elective next year, and I want to convince you to switch to Computer Science instead. Here’s why:

"Everything in the world today is based on computer technology."
"It is the one true completely hands-on course. It is the way education should be."
"It helps me to understand the logic behind games...which I love!"
"I love it!"
"Computer Science has taught me to think outside the box.  Programming is an excellent way to improve problem solving skills.  I wouldn't trade my four years of Comp Sci for anything."


I’ll check back with you this week to see your decision since I have to let Ms. W. know by the following Monday. Let me know if you have any questions or concerns.

A long time ago at "math camp" (NCTM annual workshop), someone led a talk on how to relate the Limacons and Cartioids and Rose Petal Polar Graphs to the shifted or "squished" trig graphs in terms of y = f(x). This seemed to work out really well, and the students could visualize what happens in terms of the amplitude and the vertical shift. Anyway ... we're all done with that, and after exploring on the graphing calculator for the next day, this was their homework in precalculus:

Onwards and upwards to Logarithms which I subtitle (Drugs, Sex, & Rock n Roll) due to my first few examples which they figure out (and see why logs are useful): drug absorption/metabolization, population growth, & decibel levels and hearing loss.

Posted by Shireen Dadmehr at 5:04 PM No comments:

Aaahhhhh, the luxuries of 8-10 hours of sleep a night. Lovely. AND I got to go to a CSTA Equity Workshop. I learned many valuable things (either formally, or by interacting with various people), and here are some tidbits (and a nice picture of where I was): 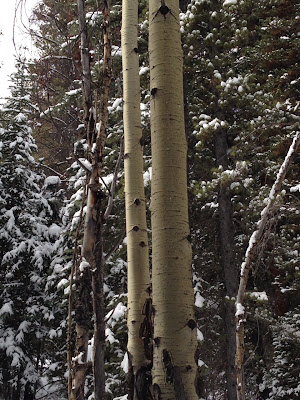 * Are your reactions as a teacher (or person, for that matter) stifling or encouraging?
* It's potentially "good" when "bad" things happen to you because you (hopefully) learn empathy or awareness of how you treat others.
* Ask ALL kids the hard questions. Kids know when you don't expect much of them.
* Be careful of saying "you are so smart" versus "you worked hard and did well".
* People need to feel invited.
* All kids need to learn to advocate for themselves.
* All people need to learn the skill of pushing through even though someone may tell them, "no".
* Just because you are not "good" at something, it doesn't mean you can't get value out of it and learn to like it or let it teach you something.
* Get out of your comfort level often.
* Don't be the teacher that "says" something but acts differently.
* Once damage is done in a relationship, it's hard to repair.
* A cool response to "I don't know": "Well, if you DID know, what do you think you would say?"
* Are you challenging EVERYONE as a teacher?

iSense (visualization of data)
Stuck in the Shallow End (book)
EarSketch (sound and computer programming)
Posted by Shireen Dadmehr at 7:51 PM No comments:

I debated how to teach the 4 sorting methods we need to know: QuickSort, MergeSort, SelectionSort, and InsertionSort. I remember learning about them and then promptly mixing up which ones were which after some time had passed, so I never really internalized them. I figured the same thing would happen to the students.

So, here is how I did it, and it's still in the process, and who knows if it will work, but I guess the bugs will show up as we go along.

1. I made a graphic organizer and handed it out.
2. I discussed what and how we would learn this topic and what they were responsible for (see below).
2. I found 8 videos (2 per Sorting Method) that spanned styles of teaching and were effective and short.
3. We watched the videos in class, and after every method (and during the video) the students took notes on their organizers, and we discussed and answered quick questions.
4. This took basically all period, and then they self selected groups to work with (2 or 3 people).
5. I premade little slips of paper that had the names of the sorting methods.
6. Their group chose 2 different slips (and repicked if the same method showed up).
7. They wrote their names on the slips and handed them back to me after they noted which TWO Sorting methods they were responsible for.
8. Their job now is to create 2 videos and put them on YouTube withOUT letting on which sorting method they are demonstrating. They will share the links with me.
9. Then, after they are all done and graded on correctness and creativity, I will have a quiz where I show a random video of theirs, and they are to write down which sorting method is demonstrated.

I'm excited to see their videos. I mentioned I would make 2 also, and now, GAME ON.
Posted by Shireen Dadmehr at 6:13 PM No comments:

A Dose of Resolve

There are a group of students that eat lunch in my classroom frequently, and while I'm busy doing other things to get ready for class and to stuff down my own lunch, I hear their conversations as background noise. A few times I heard them talking about a teacher and how if they just put on a sad face or make a request or ask "nicely", then that teacher will change a grade or postpone a due date or give credit for something that does not deserve credit. The tone of their discussion was that they knew it wasn't right, but they were taking advantage of it anyway.

So as I'm writing this, I'm wondering why I didn't stop what I was doing and address this or approach the teacher. Various reasons I guess. I know if I'd heard something really horrible like people bashing or blatant cheating, I would definitely have said/done something. Anyway, that's something for me to think on.

But, the reason I bring this on is because it strengthens my resolve when I get the same treatment of puppy dog face and poor me and please raise my grade for fill-in-the-blank reason. Just because someone asks you for something nicely, doesn't mean you have to give it to them, and it DEFINITELY doesn't mean that it would be in the student's best interest to do so. They most likely know they don't deserve and didn't earn the boost in their grade.
Posted by Shireen Dadmehr at 9:11 PM 4 comments:

I hope this will have the lasting effect of students remembering Sequential vs. Binary search in APCS. I guess time will tell, but I wanted to try something different and was inspired by various ideas on the web.

I embellished this lesson with tactile stuff of how to search for something. I showed them code, but we didn't have time to do more than that so far (other presentations that day). Anyway, it made ME laugh, and really, isn't THAT what's important?

Now what will I do with SORTING. Hmmmmmm.
Posted by Shireen Dadmehr at 10:04 PM No comments: