Every year as I teach piecewise functions in precalculus, there are students who get it and can successfully graph and understand them, but there are too many students that struggle. I've tried various things, but nothing with consistent success. Well. Last week after school I was helping a struggling student, and as I was looking over her old test, I saw that the mistake she seemed to make on the "3 piece" piecewise function was that to graph it, she made a big table with the same x values and used the same x values for all 3 pieces. I started to say what her mistake was, but then it struck me that if she reworked the idea, it could be very useful. 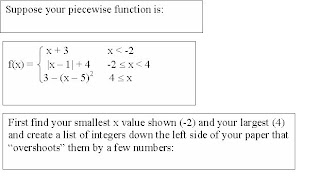 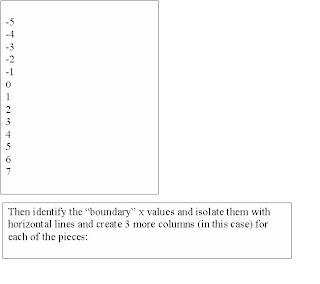 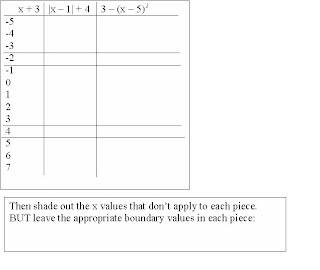 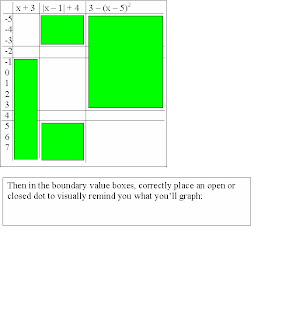 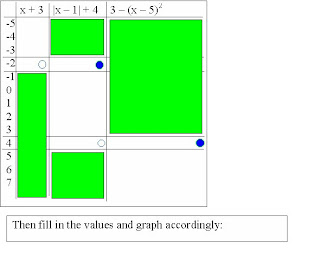 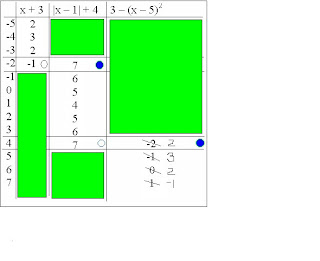 It worked for all the struggling students I had a chance to try it on, so I think this is how I'll start next year, and then show them the "other" way for those that "get it" and don't want to make such a big table.
Posted by Shireen Dadmehr at 8:57 AM 13 comments:

The Week, The Wiki-stix, & The Web

I went to another workshop this Thursday, and the algebra 1 information was very useful. What was NOT useful was the handful of people sitting at my table blatantly grading huge stacks of tests and totally disregarding the presenter and going so far as to discuss with each other about how to allocate points. Oh my.

What was ALSO not useful was my understanding of just how broken our "mentoring system" for new teachers is. One of our new teachers is TOTALLY struggling and crying and breaking down in class and being overwhelmed. I've heard from her mentor that she went in and gave her tips on what to do (do warmups, here are some activities, ...), and said the girl did not take her advice, and then the mentor thinks that's the end of it. Well, I sat in on the girl's class. Warm Ups are the least of her problem. There are some easy fixes that just need to be addressed and monitored and modeled and reinforced.

Anyway! After many deep breaths, I decompressed with some of my favorite "feel good" websites. Here are 2 examples:
DarynKagan.com (here are some old good ones)
http://darynkagan.com/heroism/stories/he_080324_computerfairygodmother.html
http://darynkagan.com/kids/stories/ki_080414_oneboyandaredwagon.html

Also, I found yet another use for the wiki stix. We started radians in precal today, and my first question was how many radii did they think fit around a circle. They drew circles and the radius, and then with a small piece of a wiki stix (stick?) they marked out the radius along the circle. It was easy to manipulate and curve.

And the funny joke I read in a book this week:
knock knock
who's there
little old lady
little old lady who
I didn't know you could yodel.
Posted by Shireen Dadmehr at 8:17 AM 6 comments:

We are being judged and evaluated all the time, and we may not realize it. In fact sometimes we may think we're getting away with things when really we're not. This past week seemed to be full of those "pop quizzes", and now my outlook on a variety of people has altered.

test1: I gave my first test in precalculus this week. As I walked around the room, I noticed the continuously wandering eye of one boy. I stood near him after that and asked him to keep his knees forward (instead of turned towards a "smart" student). Then he turns in his test early indicating he had troubles with one problem (he left blank). Trying to promote his perseverence, I said, "you're a smart kid, keep looking at it and maybe you can work something out". I realized my mistake once he picked his test off the pile of "done" tests, when he walked back to his desk and I saw him erase another problem's answer immediately and put down what I'm guessing he saw on the pile. Now none of this was provable, so I didn't snatch his test up, but this was the 1st "life quiz" he failed. Even though he thinks he got away with things, I will no longer see him in the same way, and he will forever more be the "cheater" to me.

test2: For the nth and (n+1)st time one of our math teachers was basically bad-mouthing other people. In the first instance she was talking about a new teacher that was struggling, and after she recounted the struggles, she mentioned that this person was ONLY hired because we were desperate, and the new teacher must not have had strong interviews because she was not snatched up by other schools in the district. Her second mouthing incident was about a teacher at another school that our new AP wants to hire. She recounted 2 or 3 bad things about her personality and her teaching ability. I wasn't part of the 1st conversation (came in on the tail end), and for the second, I tried to say something nice about the other teacher, and basically I didn't say anything to this lady. BUT now I think of her as the bad-mouther. I wonder what she may say about me or about other people even though she's nice to me/others to their face.

test3: I park a ways away from the grocery store entrance in order to get some free exercise. I was walking back to my car and it looked like someone else with a cart had the same idea. After she was finished unloading into her trunk, I wondered if she would make the uphill trek to return the cart to the right place or just leave it willy nilly to bang into other cars. I was betting on the latter, but she surprised me and restored a bit of my faith in people by conscientiously walking it back to the "right" place.

test4: I walked my (cute little puppies) algebra 1 9th graders over to get textbooks this past week ... after I discussed hallway behavior and such. I also walked my precal and calculus classes over (older kiddies). When we got to the book room, the "manager" seemed surprised I was trusting the 9th graders with textbooks since apparently they don't have good reputations of caring for them and returning them. He even added an extra spiel that he didn't for my older kids about the cost of the books and such. Well, after they went through the checking out process, he told them all they were the best behaved 9th graders he'd ever seen. And I have to agree since out of my 6 classes, they were the best behaved through the whole process. Go Them!
Posted by Shireen Dadmehr at 4:28 PM 5 comments:

During the 2nd week of school I had to get a sub for Friday to attend a 2-day math workshop. Oh my, whine, whine, whine: too early in the school year, too hard to leave students with meaningful work when we just started, sets a bad precedent, .....

Okay. It was a great workshop. I learned so many things that will be BIG payoffs in the long run, so can I take back my whining? (except for the fact that now in 2 weeks time I'm basically mandated to miss another day to go to another workshop).

Here are some things I learned:
* a way one teacher gets her kids to remember the divide by zero and zero divided by something rule: 0/K = 0 means it's "okay to have a zero in the numerator". N/0 = undefined means "NO! you cannot have a zero in the denominator".

* with calculator usage for calculus and showing a function and its derivative function at the same time ..... put one in y1 and one in y2 and in MODE change the graph style to "simultaneous", and then you can start and stop the graphs at will and have a rich discussion about positive and negative slopes and + & - derivative values throughout the whole graph.

* I never remember which one of the "ON" or "ENTER" buttons on the TI=84 stops or pauses the graph, so I always end up pushing both. Well! The "ON" button stops the graph, so you can get "ON" with your life.

* Which reminds me of what I shared in the same session regarding calculators and limits to infinity. I have my kids look at just one of the polynomials of the numerator or the denominator in a rational function, say 4x^3 - 2x^2 + 100. I ask if you plug in larger and larger numbers, will that evaluate to basically the same or different value than if you plugged in the same large number to 4x^3 (the dominant term). They are convinced they'll be different. So we put 4x^3 - 2x^2 + 100 into y1, and in the main window do "function notation" of y1(5) and compare it to 4(5)^3. Then we start comparing the 2 things by typing in larger and larger numbers. They're eventually the "same" on the calculator. I tell them that the highest power term is like the ocean and all the other stuff is like spit, and if you spit in the ocean, it doesn't change the volume much, so you can basically ignore it when you are calculating limits at infinity.
Posted by Shireen Dadmehr at 1:43 PM 3 comments:

More Games and Such

I decided to add 2 new links to my homework website for games since these are ones I love love love. The first is ABC pureisu. Basically you place the letters A, B, & C (and sometimes D) so that every row and every column has exactly 1 of each. You can click around the buttons to get different sizes and difficulties of puzzles. By clicking in the box, you can place your letter.

The second is a "squiggly" sudoku site. I love the different variations of sudoku, and this one also has different difficulty levels. A different puzzle appears every day. This one you have to print out.

I had put a "notes" section on my website, but ultimately knew I wouldn't keep up the copying of the notes, and I didn't know how helpful it would be. So I decided just to sum up the topics of the day/week and mention what would be important to know how to do, and then I will provide web links to various sites that show/quiz/video/tutor/etc the same topic. That way the students have a different way of learning the same thing, and maybe a different explanation will make things click for them or just let them review more. It also gets them in the habit of searching the Internet using the topic name, and they can find other help.
Posted by Shireen Dadmehr at 1:02 PM 2 comments: