I gave the following quiz today in Algebra 1, and I've had "Scribd" on my radar for some time, and then I saw it used on the "f(t)" blog, so I thought I'd test it out here to see what's what.

Hmmm, not exactly perfect, but I'll work on it.
Posted by Shireen Dadmehr at 8:46 PM 3 comments:

I have passionate feelings for this resource and turn to it whenever I need great ways to ask questions or great real-life examples. I got my copy at an NCTM workshop, and am doing the happy dance ever since. For example, in precalculus today we were talking about function notation, and after we did some "math" graph and table and equation examples, I pulled 2 context examples from the book. One was a table having to do with NFL revenue for a number of recent years, and one was a velocity vs. time graph for a man going to the store.

They both generated discussion about the amount of money NFL made (billions!) and interpretations of the velocity graph and why it may be so "wiggly" going up and down and such and how you knew when he reached the store. The questions were worded such as: find v(24) and interpret the meaning. So they had to think about what "24" meant in this problem and what the "y" value meant and put it all in a coherent sentence.

We also started a discussion on graphs such as y = abs(f(x)). We first refreshed our memory on abs(x) (much needed for some folks). Then I had them make a table for f(x) = x*x - 2 and graph it. Then I had them hold up their hands in the shape they thought y=abs(f(x)) would be .... some, of course, held up "V" hands. So we made the table values and graphed JUST the points, and then I showed them the visual of "flipping" all the negatives "up". Ooh, ahh. That was a good segue into doing the same table/graph thing with f(x) = x ..... then doing y = abs(f(x)).

I'm just saying. .... but maybe that's the norm in other schools. BUT, I rember my math teacher friend in another state complaining that she had LARGE classes one year .... "26".
Posted by Shireen Dadmehr at 9:10 PM 3 comments:

A while back I was first introduced to Wikki Stix at a calculus workshop where the presenter showed how she taught slope fields by having large pieces of graph paper around the room, and each group had a differential equation and each person in the group had a point or 2 or 3, and they were to calculate the slope and stick the piece of wikki stix on that point in the appropriate slope. Super cool.

I was at a teacher supply store the other day, and found 48 for $5.95, and bought them thinking I could find some use for them. Well, now I have 2 things so far. On the first day of school, I will review functions and lead to function notation and how to read f(x) and find f(3) and find x such that f(x) = 6, etc, by first handing out premade graphs/grids/coordinate planes to each student and one wikki stix (stick?) to each kid. I'll first instruct them to plop down a "graph", and maybe have them decide if they're functions or not and maybe have themselves walk with their graphs and separate into 2 camps of functions and non functions. They can then self correct by glancing at others and discussing it amongst themselves. Then I'll say find your f(3), and separate yourselves into like groups (how to deal with non integers .....???). Anyway, you get the idea. I could do more.

My second idea is what I think is an improvement on an old activity I've done with precal in the past regarding learning the sine and cosine graphs. But my teacher friend (who I first learned to teach with/from) in another state basically does the same activity but with Wikki Stix. She has them do the measuring of the angles and the heights, not with a string, but with the Stix. Also, once they measure the "height", they snip the Stix into that length and "stick" it down on their graph. So ultimately, later on you have a Wikki Stix sine curve graph. Way cool and something I'll try this year .... though with 3 precal classes of (current sizes) 37, 32, 30ish, how much will that cost?
Posted by Shireen Dadmehr at 3:51 AM 2 comments:

I was at a math workshop today, and from a participant I learned a great calculator skill that left me saying, "where have you been all my TI-83/4/silver edition/titanium life?".

Suppose you're graphing, and suppose you simultaneously want to see the graph and the table screens. Well: mode > G-T, and poof, when you hit graph, voila, split screen. Then you can toggle between the 2 parts by hitting the "table" or "graph" button, and then you can do whatever you want on that part of the screen.

Also, you can split the screen horizontally (mode > horiz ...) and then you can show the graph and either the main window or the lists or a table, etc.

Ackh! In the process of updating my homework website further, I thought I'd add a "games" link that showed some fun thinking/math/logic games. Well, of course I had to try them out to see what I was linking. .... Too many hours later, I'm addicted to 2 I found at http://www.coolmath-games.com/ : "walls logic" and "bloxorz". The first has you building diagonal walls on each of the tiles in a grid, and you can't form loops, and you have to follow "# of walls rules" for certain intersections. The second has 33 levels, and you basically move a brick around to get it in a hole. ... Okay, must stop playing and go do other things.

On a side note, as I was trying the new games, I found myself getting blurry eyed just reading all the instructions, and I just wanted to jump in and test the waters instead of reading about it. Hmmmm, sounds familiar. So now I'll try to think of each school lesson in a new way: how can the students get started right away doing something and then learning what they need to know about it at various stages of the class.
Posted by Shireen Dadmehr at 3:08 PM 5 comments:

It looks like on 8/25 we're starting right away with 1.5 hour block classes when school starts (as opposed to meeting all classes and having an "alpha" period with about 40 minute classes). I need about 40 minutes to call roll and ask for pronunciation corrections, have them fill out a seating chart (I like them to sit where they want the first time, so I see who can/can't sit together when I soon make a seating chart), take pictures of groups (so I can memorize names), and talk about the syllabus. While all this is going on, I like them to be doing something. Here's my something: 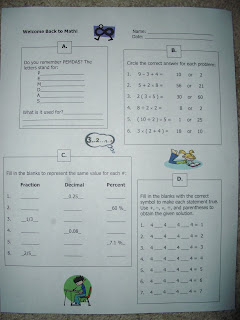 They'll work on it quietly while I'm calling roll, and then I'll prompt them to check and work with their group and meet everyone in the group while I'm snapping pictures. Section "A" prompts them about "PEMDAS". Section "B" has orders-of-operation problems with 2 answers to circle, one for the common mistake and one correct answer. Section "C" has a fraction/decimal/percent table with one column filled out where they fill in the other 2 with equivalent expressions. Section "D" has four "4"s and an answer, and they're to fill in operations to get the right answer.

Here's part of their first assignment (and parent homework): 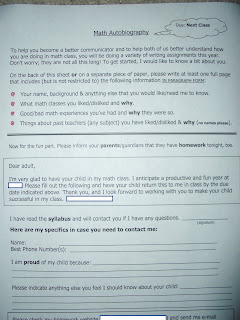 This is a math autobiography and asks questions about past classes and school experiences and such. It also asks their parents to indicate "I am proud of my child because" ....

This will tell me many things about the student: if they do work on time, if they are neat/verbose/last-minute/thoughtful. They also get to see their parent's bragging comments (and sometimes if there are no comments, I'm sad for the kid). I also have a good opportunity to get their parents' e-mail address for future grade sending.

Then I have about 50 minutes left. I'm thinking of a "box plot" activity and a "meet and greet" activity. ... still in the planning stages, though.

Just last week I went to an aerobatics contest my husband was in. It's small, so EVERYONE is wrangled into volunteering somehow. 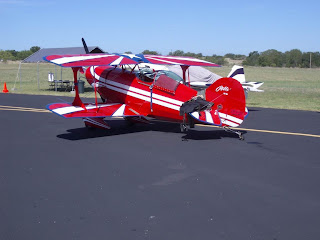 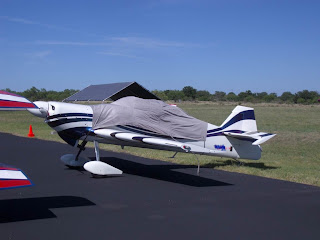 I got to be a boundary judge and learn the skills of how to read a sequence card and how to call the ins and outs and how to survive blistering heat and curious cows and carcas sightings. First my partner and I (another wrangled wife) had to drive 10 minutes to the location. 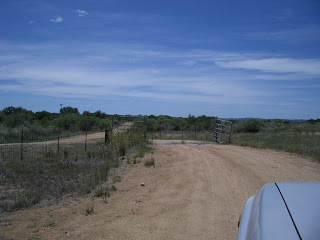 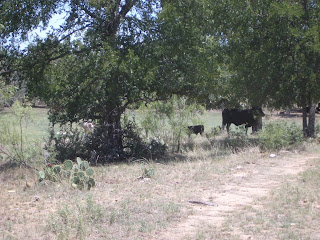 Here is an actual corner boundary that the pilots would see from the air. 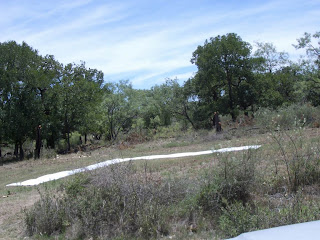 This is the other wife sitting in position ready to call outs/ins. The contraption is uber cool and thought up by an engineer/pilot who used a compass and his brains. AND there's math involved (what else). 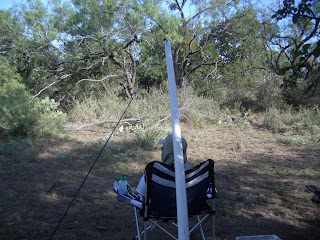 There are 2 sets of 2 strings lined up perpendicular to the other set, and you line up the strings of one set with your eye and .... since 2 lines form a plane, you can determine when the aerobatic planes cross the boundary or not. We were at the "southeast" boundary, so our job was to call "out south", "in south", "out east", "in east".

Boy were we stressed about doing it right. We're not pilots, and we had to figure out what squiggly lines on the cards matched what things the pilots were doing in the air. Eventually, we mastered it as a team. 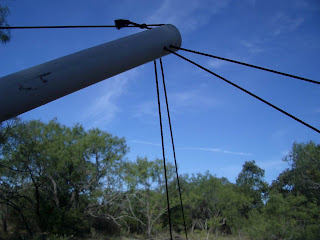 Here are some things that kept us company each time we went out. 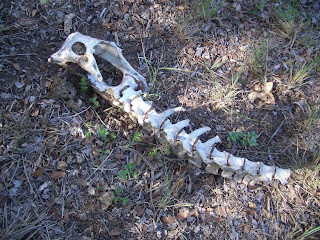 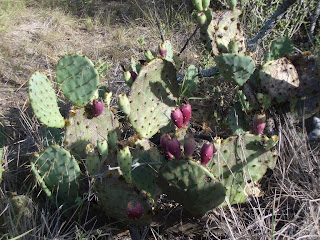 Posted by Shireen Dadmehr at 9:04 AM No comments:

Well, I am glad I started my homework website last year, and I'll continue it this year. I found many benefits:

* I made one of the 1st homework assignments be for parents to look at the site and send me an e-mail. This gave me their address for sending home grades, and it also made them aware.
* It gave me a place to post extra worksheets and solutions where they could download them (I didn't do this too much, but maybe will increase it this year)
* Students had an easy way to find homework assignments for whatever reasons.
* Parents now had a place to see/check whether their children had homework or tests coming up.

* I want to somehow incorporate quick easy-to-make-&-upload videos showing various math techniques (I'll film them).
* I potentially want to link to videos from TeacherTube (since YouTube is blocked at our campus).
* I want to post notes for students that are absent (this one I'm iffy about for a variety of reasons: difficulty, space issues, student accountability, ...)

All in all, I'm happy with weebly.com. Hopefully, it will continue to be free or even cheap, and hopefully they'll resist putting ads on their/my page since that was a big draw for me.
Posted by Shireen Dadmehr at 2:42 PM 3 comments: