I spent 2 of the class periods after the AP Exam exploring and expanding on a cool problem I found in Smith and Minton. The problem is about what a sonic boom is, and how you can visualize it graphically.

The first day we had to refresh our memories on parametric equations and graphing. Then the students looked up various things on the internet and wrote it in their notebooks as such: 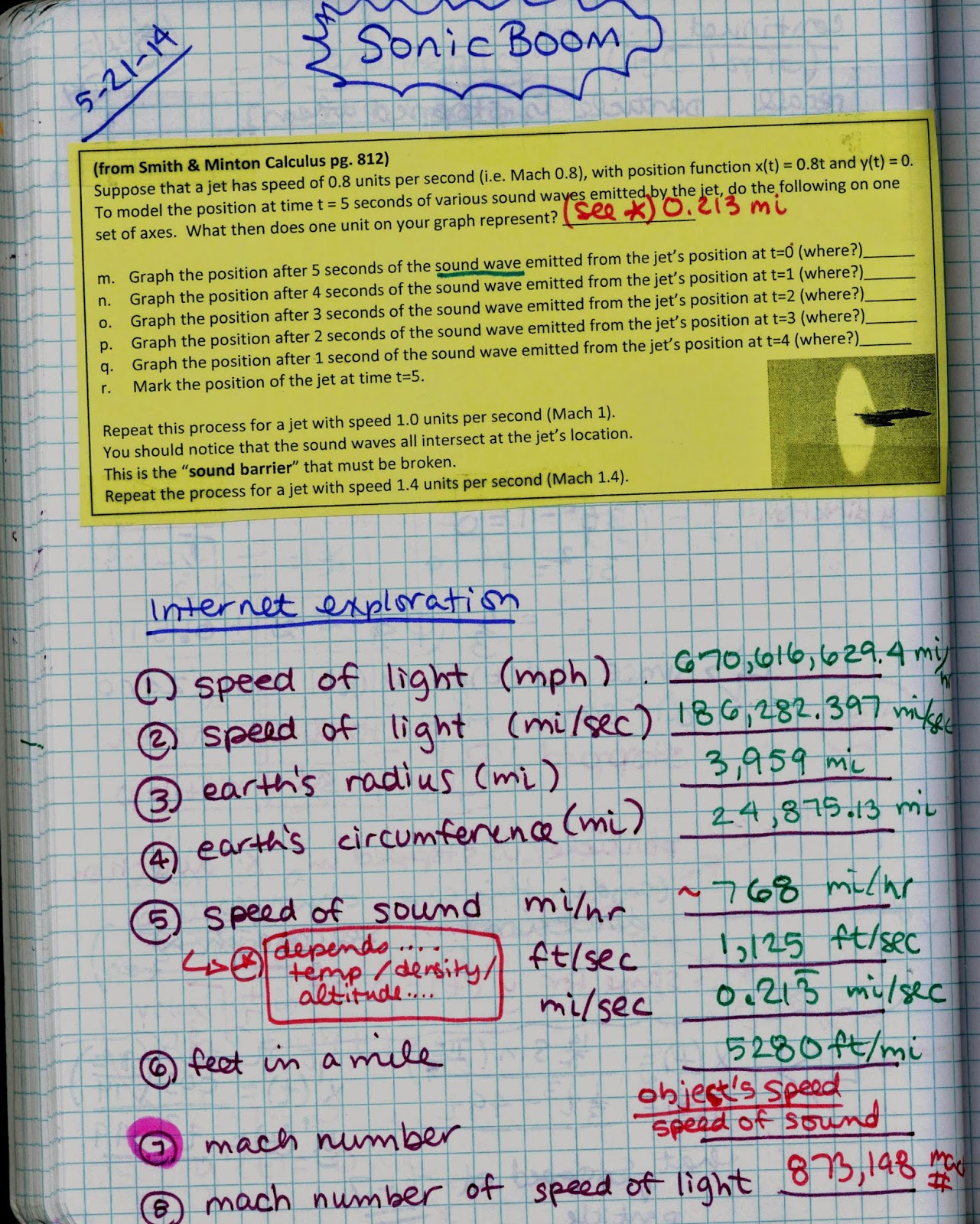 We had some good discussion on the various speeds and if they are "exact" and what could change the values. Then I made sure they got what a Mach number is by the following "quiz" in their notebooks: 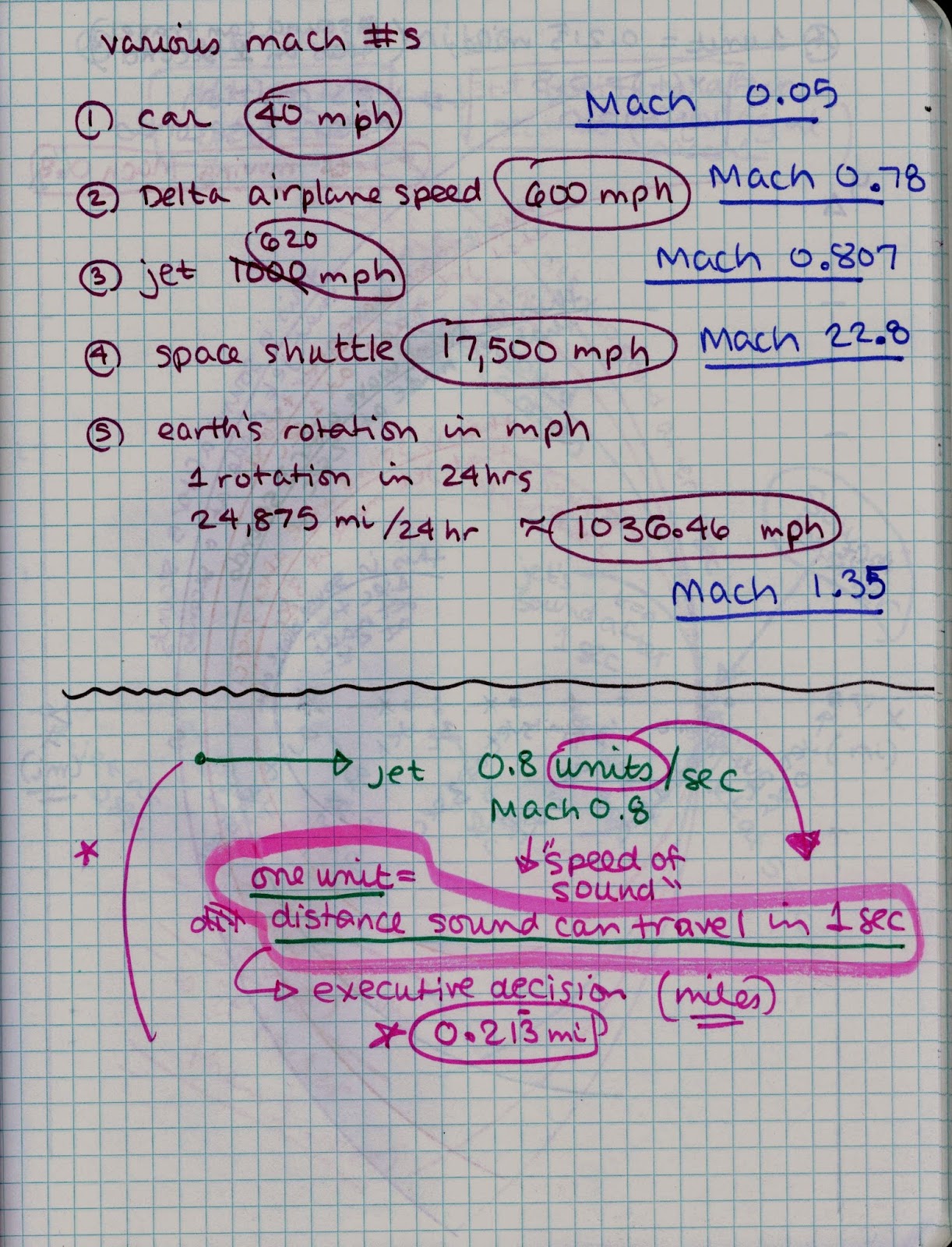 I had them look up the speeds of various vehicles and we tried to get a wide range of numbers and then they had to figure out the Mach numbers based on their speed of sound.

On the 2nd day we then read over the "yellow" paper from page one, and I had to make sure they understood what a unit on the graph was. That was fascinating. It was more of a struggle for them than I would have thought, but we eventually got to it, and again, good discussion.

Then the actual graphing began. We had to take it slowly and keep talking about what the units meant and how you made decisions and such. Here is the graph for a jet going Mach 0.8. We had to keep stressing that the "arcs" were at time 5 seconds after "start" of the 5 noises the jet made at various times: 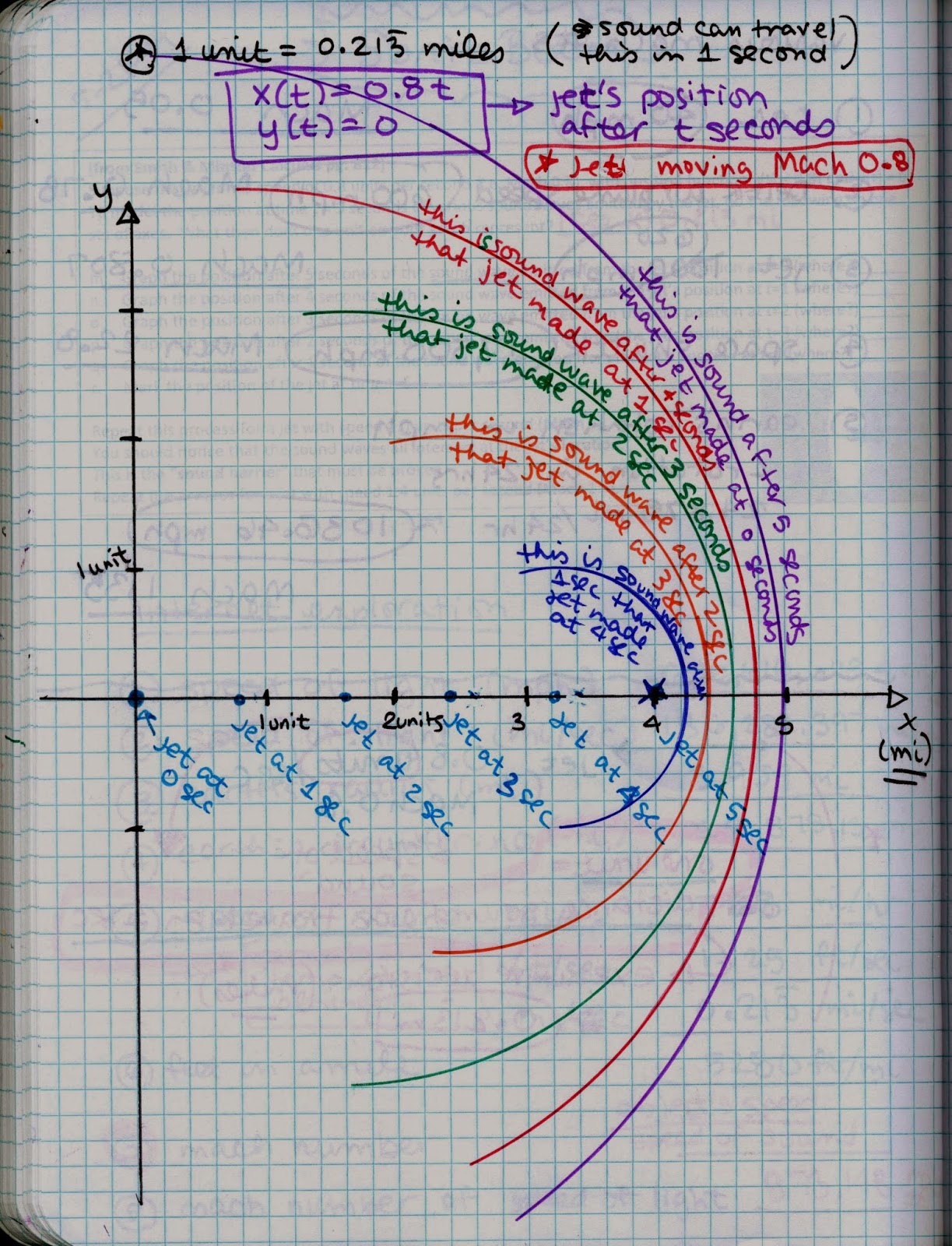 Then we graphed the "same thing" but for the jet moving at Mach 1: 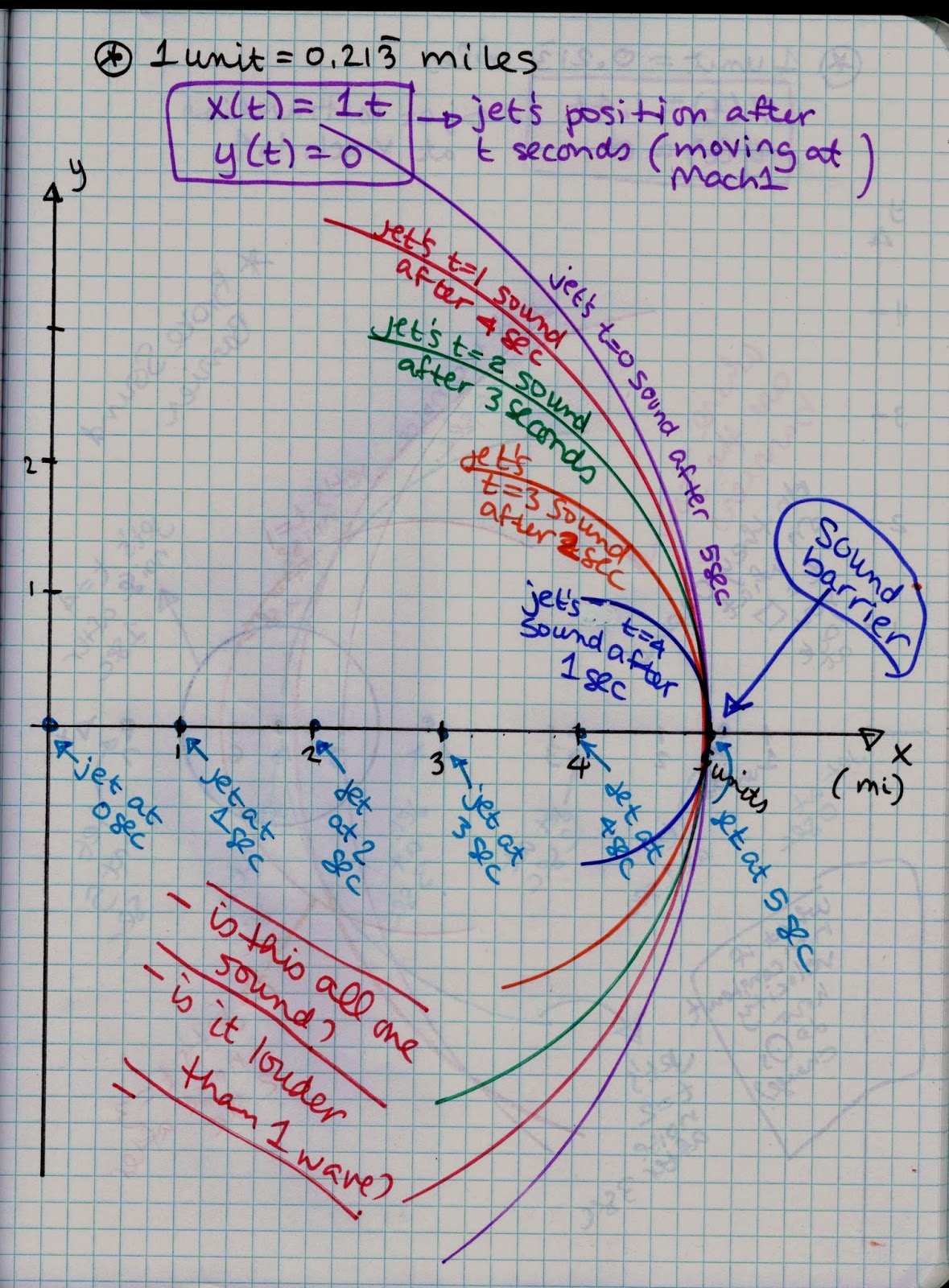 The students were excitedly asking me question upon question, because really it is cool and wonder-ful ... and I kept mentioning that I'm not an expert, but that we should write their questions down to think about for later.

Then finally we did the same process for a jet moving FASTER than the speed of sound ... Mach 1.4: 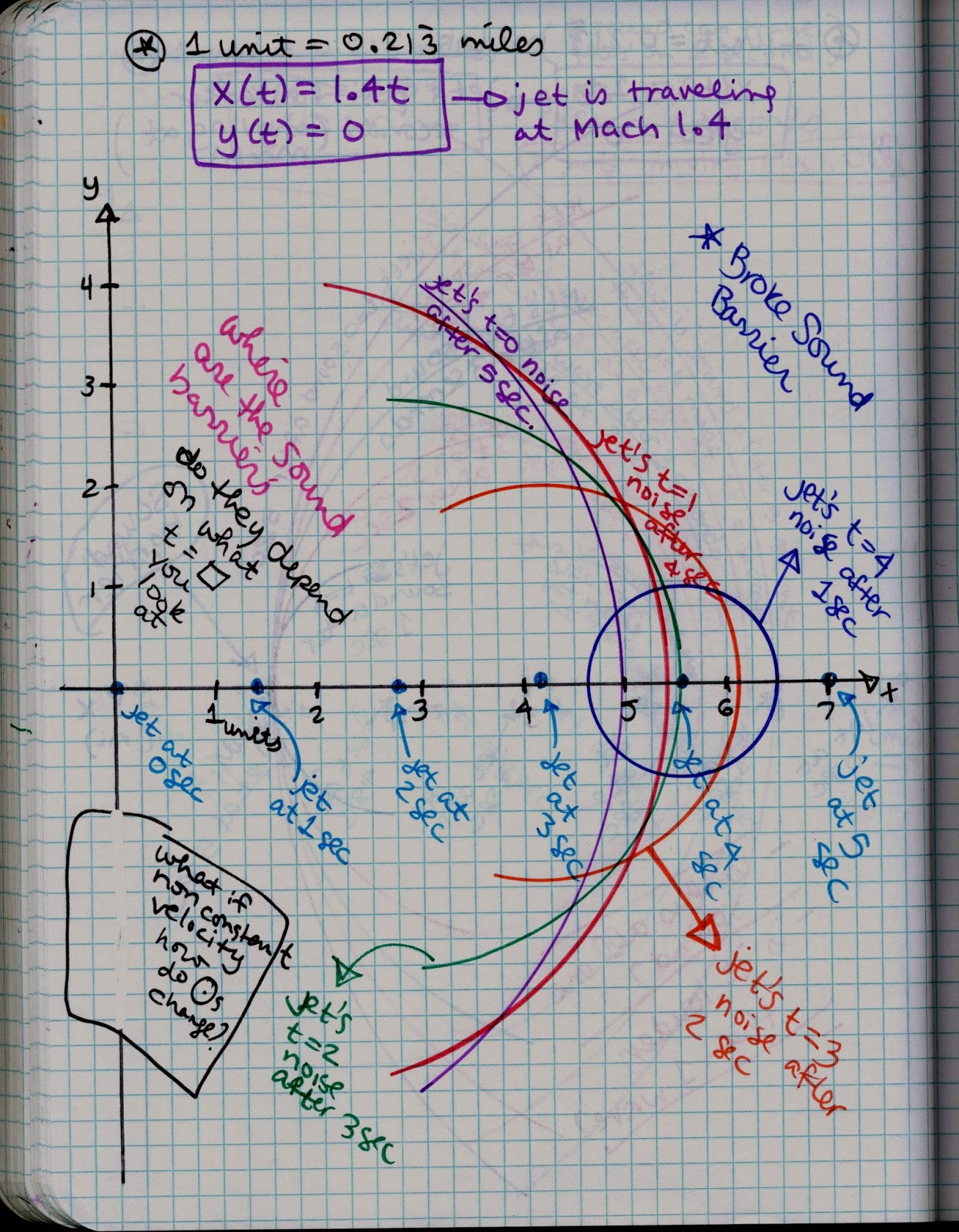 We had to be cautious with scales and such and all sorts of great mathy things came up. Then class was over.

I loved their enthusiasm and questions and wonderment at this actual topic.

Posted by Shireen Dadmehr at 5:34 PM No comments:

Why are all these teenagers acting like ..... teenagers?! How old ARE you anyway? Behave and fly right!

Excuse me while I detox:

Our principal some time earlier in the year did away with bells for whatever reason. You were still required to show up to class on time, but you had to rely on yourself and your handy dandy watch/clock/cell phone. I let a ton of things slide in general (lie, but ...), but one thing I do not like is kids sauntering to class late. They started being 15 seconds late, then maybe a minute, then consistently 3 or so minutes. It got to be too much. So I instituted a "be in the room or get a demerit" policy last week. I hate giving demerits. Boo on being the bad guy. I know it's ultimately good for them, and I know I have to be consistent, and I know I still have a grumpy knot in my stomach for the about a bazillion demerits I have given out in the last several days. Kids have started coming to class on time. Shocker. I still have a grumpy teen that is consistently late. Yay! Have her for 2 classes. Twice the demerit fun.

AP Calculus Exam Studying. Hmmmmm. I think a good chunk of the kids are studying the way I think they should be studying. The rest are being, well, teens. I have carved out time in class to do released exams and have them discuss things. In my mind that's going to help the most. We will see in July when the scores come out.

AP Exams start this week. So do EOCs. And thus, so do tons of kids being gone from class in a sporadic fashion. Yay for being flexible and being able to roll with it. Or at least putting on my game face.

My CS class and I are going on a field trip to an apparently well-known local game developing business. We have spent some time playing their games and researching them and creating questions for the field trip.

The NHS group of kids I co-sponsor have done an amazing job this year with doing service and getting fund-raising ideas and actively participating.

My precal students are just a hoot, and even the not-so-strong-mathematically students are a treat to talk with.