I have used transparencies in the past for what I FINALLY figured out today. Sheesh! I feel slow, but at least I now have a new tool to use.

Here's a link to a 2 minute video.
Posted by Shireen Dadmehr at 6:45 PM No comments:

I'd noticed lately (again!) that I'm treating my students like math robots. They are there to do my math homework. If I see them in the halls, my brain immediately scans through their work ethic and things they may or may not have done and tasks they have to take care of, and the FIRST thing to pop out of my mouth seems to be, "come in for tutoring" ... or "you need to make up your homework" ... or "why haven't you made up your absent work" .... or "what are you doing wandering the halls? you should be doing work".

Who invited Crabby Pants to the party?

Once I noticed that, I tried to just shove all those thoughts aside and settle on just a simple, "hello ... how are you?" type of greeting accompanied by a smile and a wait for an answer. I've taken a vow of "NICE". Don't know how long it will last. Also, I am NOT including my salty sailor mouth in the "nice" restrictions. I'm simply going to recognize these human kidlets as actual humans ... or try to anyway. Crossing my fingers that I can keep it up (until the next time I realize I've fallen off the "Nice" wagon).

Posted by Shireen Dadmehr at 9:46 PM No comments:

I'm totally sure this has been done to death, but I liked how this project turned out. We are doing a unit on transformations, and for the reflections portion, one of their homework assignments was this. In essence, they had to draw the x and y axes. They also had to draw the lines y=x and y=-x. Then they had to draw a word that was at least 4 letters long in the "first slice" (between the line y=x and the x-axis in the 1st quadrant). Then they had to reflect that word ALL around the lines and show some key points that they/I could check for accuracy.

I liked the "Reflection on the Reflection" piece I had them do in class when it was due (after they did a gallery walk). I asked them to write what they liked and disliked about the project and about their final product and if anything was challenging or easy or other such thoughts. It was enlightening to read their comments.

I didn't like that a ton of the final projects were such that their original word was "horizontal". That made it easier to reflect, I think. Maybe if I did this again, I'd say they had to do a "tilted word". I also think block letters may be a future requirement (for the challenge). I also think I may say that some letters have to have curves in them. Anyway, voila: 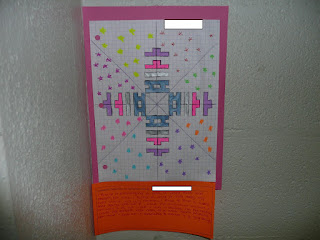 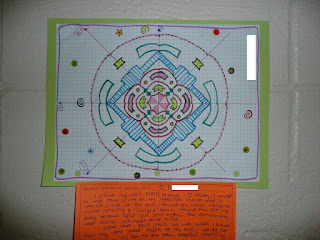 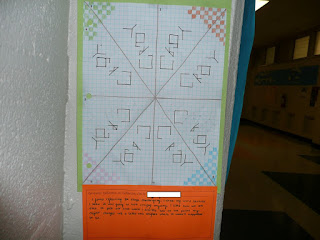 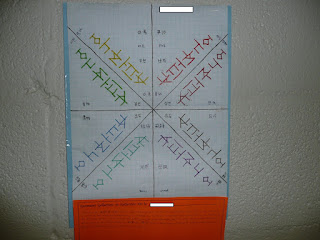 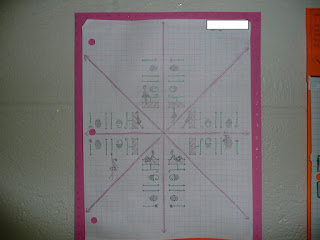 I just got back from the Dallas Regional NCTM conference. Amazing. I've only ever been to the national one in April, but we haven't been able to go for the last 3 years since it's right around state-wide-testing time. Now I actually think I enjoyed this Fall conference just as much. It was less headache to get to (other than the scrambling at the last minute to do lesson plans). It still had great talks. And it was in the beginning of the year, so I feel I could implement stuff I learned.

We went to great talks on brain research and precal projects and transformations in geometry. I bought some terrific books on formative assessment and other things. More later when I have time to process.

One seemingly little thing that is BIG ... but maybe people already know it ... is regarding the TI-84-ish calculators. I've always done the VARS, Y-vars, bla bla bla to get to the Y1, Y2, etc. functions when I need them. Oh. No. There are shortcut menus. Who's been hiding the shortcut menus from me? I want names!

Apparently, when you enter: Alpha F4, then you get a whole range of shortcuts and can just chose Y1 or Y2 at your whim's desire. Here's a video, too.

What else have you been keeping from me?

I was finishing up my flipped lesson taping tonight when I saw the web cam and decided to take a picture to send to my husband who's on a trip. I added a goofy message and was done with it.

Then I got to thinking on my drive home, that I could totally use this on tests or worksheets for an extra added goofy factor. I can add mustaches or weird eyes with editing tools. I don't know how things will turn out in black and white, but here are some brief things to get the ball rolling:

I was helping a calculus student with her test corrections, and we were chatting while she was writing things up. She said 2 interesting things. The first was:

She explained that when I look at some work she does to check it, I scrunch up my face in such a way that she interprets it as me internally saying, "what type of idiot would put this chicken scratch down and call it math." Then when I'm finished scrunching, I turn to her to explain with a bright cheery look on my face explaining the correct things she did and guiding her to fix certain things.

Sheesh. Little does she know that my face scrunching is just me thinking and squinting my eyes to see better without having to worry about how I look on the outside. Apparently, now it is true that LOOKS MATTER.

The second thing she said was that math makes her feel stupid.

Again with the SHEESH. She did have a good explanation, though, that she knows theoretically, but I don't think it translates to her heart of hearts.

She mentioned that (and she cutely says, "I don't mean to sound egotistical, but....") in other classes, she doesn't have to put out much effort to get good grades. Things come naturally to her, and it's just a matter of putting in the time. But with math, she has to actually think and if things don't come instantaneously to her, then it makes her feel stupid because of the experiences she has with other classes.

She also mentioned that even though she feels stupid in math class (now this is a girl that gets high B's and could get A's), inevitably on SATs and other standard tests, math is always her highest score. We thought about it for a bit. I'm not sure, but I think it's because in math class, it's new stuff that students are struggling with, but on standardized tests, it's more like a puzzle, and it's stuff they've seen before.

Anyway ..... here's to me making kids feel stupid .... yet smart at the same time. Woot! Just another job perk.
Posted by Shireen Dadmehr at 2:30 PM 3 comments:

I find it fascinating that once you ask a student to find the equation of the tangent line to a trig-type function (say y = x*sin x) at x = pi, they completely blank out on finding a point on the line. What? I plug in pi? That's outrageous! Whoever heard of such a thing? Craziness. I vow to keep hammering away at equations of tangent lines this year. File...

Posted by Shireen Dadmehr at 7:06 AM 2 comments:

Okay, this 5 different preps thing and the club after school and the InvenTeam meetings and the NHS co-advising and the other start-of-the-year shenanigans is starting to make my eye twitch. I need to remember to take deep breaths and do my best and not worry about wanting everything to be perfect. I have to embrace a constant state of frantic-ness. I keep picturing myself with horse blinders on and JUST worrying about the present moment and juggling at most 2 or 3 other things in the back of my mind.

It's going to be great. It'll ALL be fine.

On a positive note. Love my students. Even though some of them are a pain in the patootie, they're still fun pains, and we've known each other for at least 2 years, so we can banter back and forth about our "loathing of each other". Ultimately, at my school, everyone really is trying to do their best, and we don't have to worry about sneaky, mean-spirited behavior, so I know I'm very fortunate in that respect.

And when there is bad behavior, I/we have to remember that the behavior ISN'T the person. It's just one aspect of the person. I kept scrunching my face and shaking my fist at the kid (in my mind) with a "what are you thinking?" and a "do you know what horrible behavior that is?" and a "what kind of upbringing did you HAVE?" and all that.

Then I just redefined the whole kid as THE PERSON WHO THINKS THAT IS OKAY TO DO. I have to remember (and it's a struggle, and it took me a while this time, and I don't know if I can keep it in mind consistently) that this is just ONE aspect of this student. They have many good qualities, and this was just one thing. They need to be called on the rug for it, but if no one does it, then they maybe don't realize how bad they've made others feel. I shouldn't write off the student. MUST. Keep. Remembering. This.