Last year in calculus on day one, my students explored local linearity on the calculator. The NEW fancy schmancy TI-nspire calculators that THAT class had experience with. This year's group is used to TI-84's, so they need some prep work. But since I wanted to start with Calculus and not Calculator-us, I'm switching what we're doing: 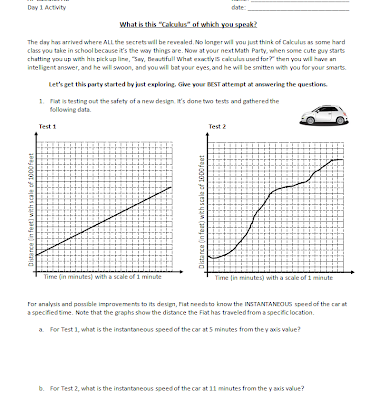 As I'm taking care of administrative things, they will be working on this. They know nothing about derivatives and integrals and calculus. I will not help them. 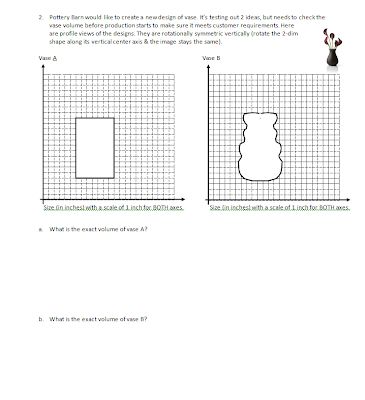 Afterward, we will discuss the "words" that define calculus: a study of rates of change, instantaneous values, ...
Posted by Shireen Dadmehr at 5:27 PM 17 comments:

ME - for "Continual False Expectations in the Face of Reality"!

Thank you everyone who made this possible. I couldn't have continued my fantasy of thinking I'd be TOTALLY Friday-ready for the Monday-arriving students if you hadn't smiled and nodded and pretended right along with my dream world. There should be doctoral research on that part of my brain that flies against the force of 16 years of contradictory evidence, that THIS year, REALLY, I'll totally get everything done by Friday. Yes. Yes I will. Copies would be made. Details would be hammered out. Room would be Fun! Kicky! Inviting! All. By. Friday.

In other news: I'll be spending the weekend at school actually finishing these things.
Posted by Shireen Dadmehr at 8:21 AM 2 comments:


I made my new planner for the year. I found various funny and inspiring images on the computer and cut and paste and printed. Then I put them on the front and back and inside covers, and I mapped out the calendar. I also covered it with packing tape. 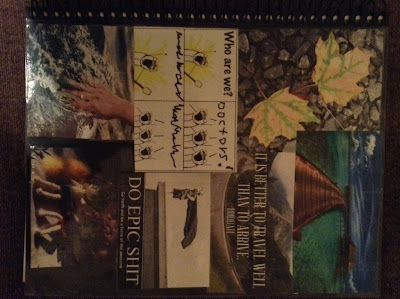 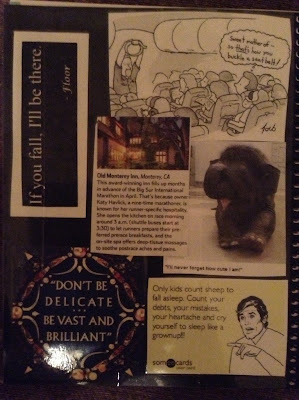 Do you see that in February? What's that, you say? Why yes, I did register for my first marathon, thank you for asking! I plan on being very obnoxious and mentioning it often. I figure if I'm enough of a jerk about it and talk about it ad infinitum (ooh, $10 words!), then I will be forced to follow through. 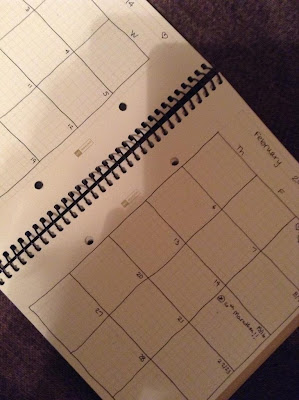 I was inspired by a student who ran the marathon last year, AND by this blog entry from The Blog of Impossible Things. I keep running across the word "epic" lately, so I'm taking that as a sign to try and have an EPIC year.
Posted by Shireen Dadmehr at 7:25 AM 3 comments:

Just back from a last-minute trip to DC and Canada. Didn't know if I was going to go this year because of jury duty, but I risked it (the probability was low due to being called in in late July) .... see! Math in action!

I had fun touring DC while my husband did work stuff. I saw my oldest friend - funny story: I've known her one year longer than I've known my husband. In fact, I was with my friend when my "future husband" walked up to us at a "welcome back grad students" shindig and tipsily started chatting us up. In fact, come to find out YEARS later in a "how did you two meet" conversation, my husband mentions that, "yeah, you were both okay, I would have dated either one of you." Hmmmmm. Anyway. Saw my oldest friend and went to the Newseum. Awesome. It costs $$, but it was still fascinating. Here is the 9/11 section with random people caught in the shot. 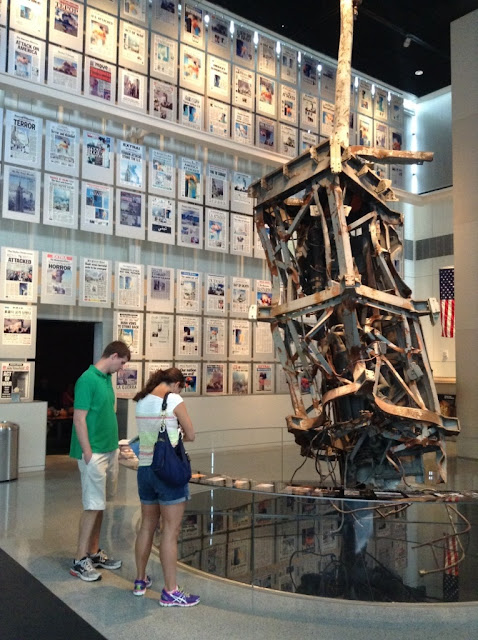 I also finished the 3 dolls I made for little kidlets (niece and niece-in-laws????). I thought I would do a montage of the dolls along the trip, but they were so wobbly, that it ended up looking like they were drunk the whole time. I like it. There is a margarita picture for good measure. 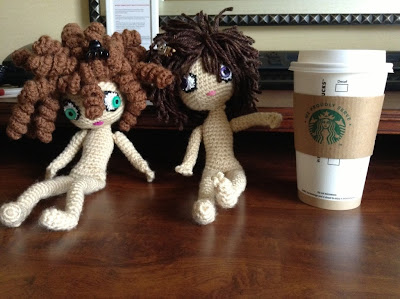 Whoa! What a night! Let's revive with some java! 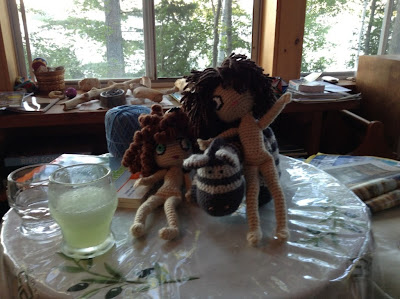 And what do we have here? Let the games begin! 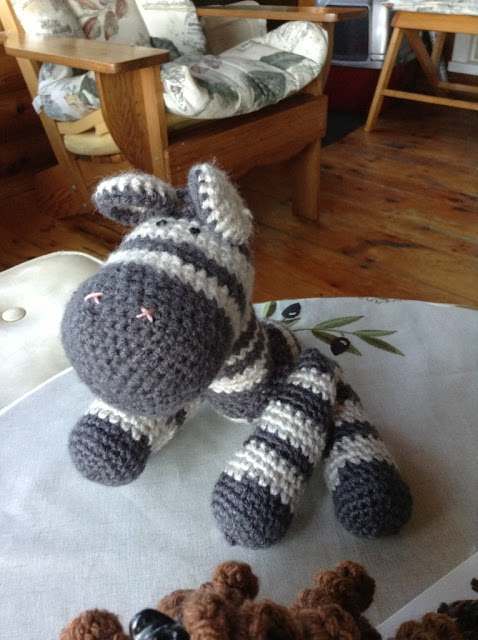 Who ARE those crazy girls? I'm just here to look cute and innocent. 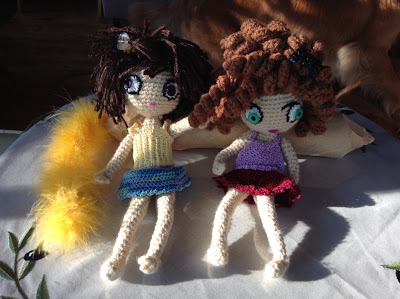 Clothes? What is this archaic nonsense?! 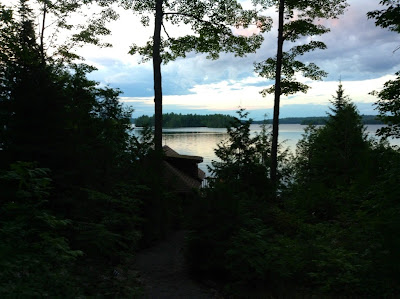 Relaxing location of the in-laws cottage. 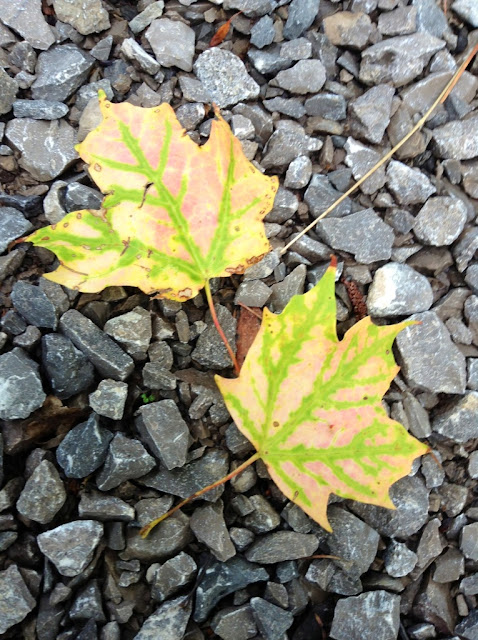 Their leaves are already starting to turn! It was a high of high 60's the whole time we were there. WAY different than Central Texas.

School starts with PD this coming Monday. I was SO going to go in early and unpack and get settled. But then the crabby, perimenopausal me said, "No!". The cranky me said, "Go out and enjoy the rest of the summer with a bang!". So, that's what I am going to do for the next few days. I wonder who's going to pay for it next week. Any guesses?
Posted by Shireen Dadmehr at 10:55 AM 2 comments:

For the past 5,000 years I've been using the same Math Autobiography as the first day homework assignment. Though I've enjoyed it, I've A.D.D.-ed out of it and decided to mix it up. This is my first draft of what I'll be expecting of my students this year in math: (the worksheet). I'm curious to see what they come up with. I think I'll tell them (and follow through) that I'm doing the assignment also. Really not a sports person at all, so that's going to be a stretch for me. 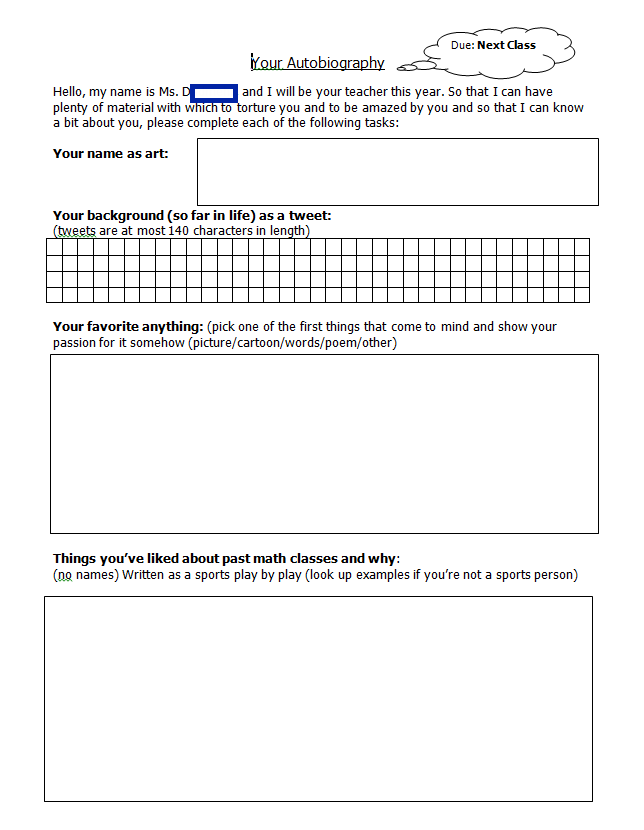 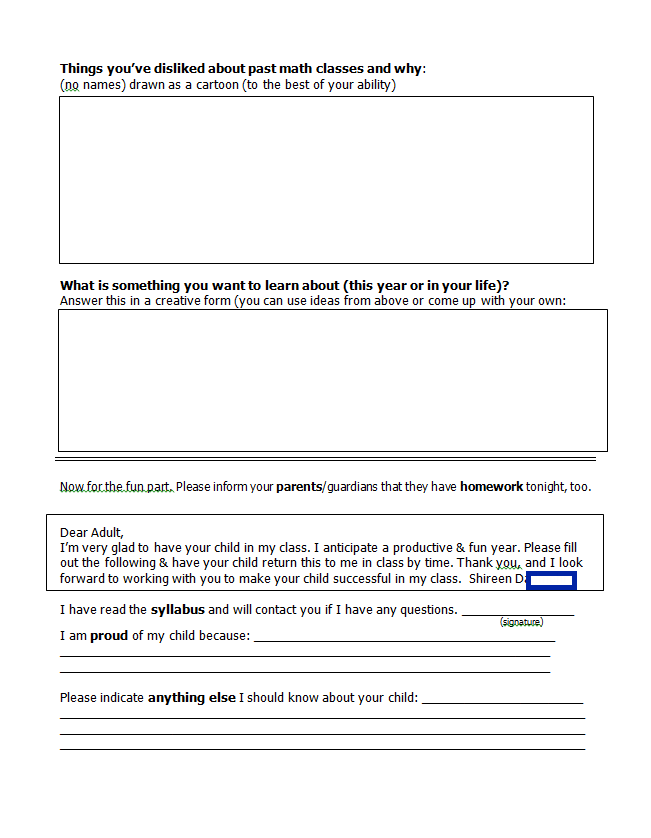