I was SO excited for the 1st weekend to come after school started, so that I could catch up on sleep. Didn't happen. Apparently, my body now thinks it's a great idea to try existing on 6 hours per night or so. BUT this is only in the school year. Go figure. AND I have jury duty on Monday. What's up with that?

Anyway, I had some great projects come back from our summer packet for geometry kids. The kids are so creative. Here are some: 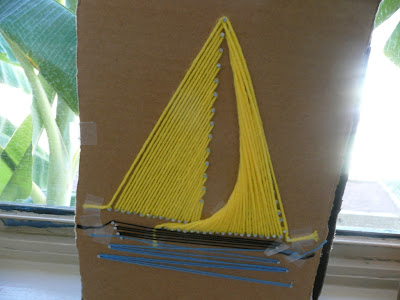 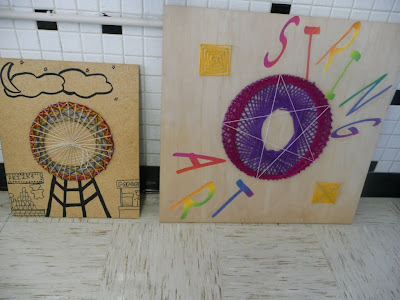 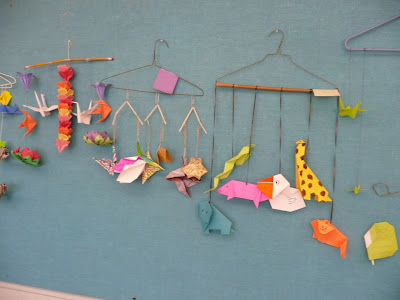 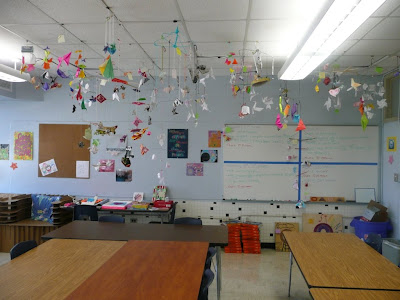 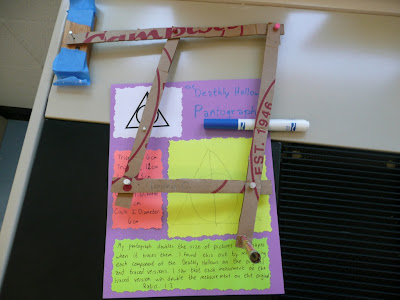 I also did this activity just yesterday with my geometry kids. I like the fact that it's not necessarily a direct match up, so they have to think. 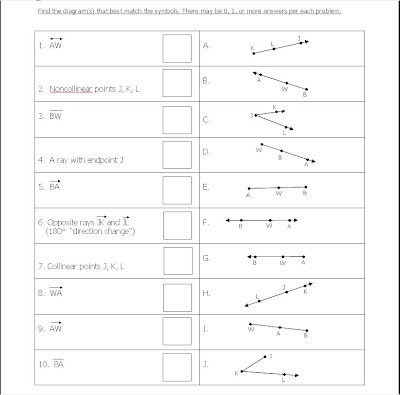 Posted by Shireen Dadmehr at 6:13 AM 9 comments:

We had an all-school assembly before classes started on the first day of school yesterday. Tons of hugs were given and received between returning students and teachers. Before I continue, in my defense, I just want to say at the outset that I got my fair share of hugs. I'm just saying.

At one point, I see one of my former students (I've had her for 3 classes so far, and another this year), starts running towards me with her arms outstretched and a big smile on her face. So, I smile back and open my arms ..... just as she runs past me to greet another teacher.

As she passes me and sees me waiting, she hesitates slightly ONLY slightly as if to say, "oh, awkward", and then continues to go for the OTHER teacher hug.
Posted by Shireen Dadmehr at 6:39 AM 2 comments:

I'm happy with the outcome of my geometry and precalculus day 1 activities. Now we'll see how they pan out. Now to plan/map out the REST of the year. 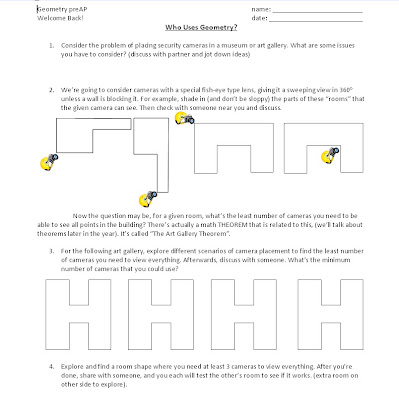 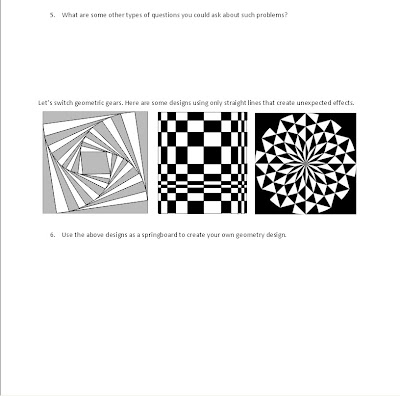 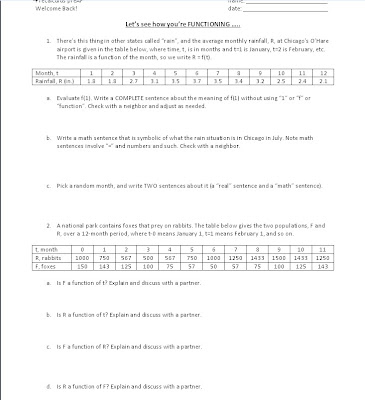 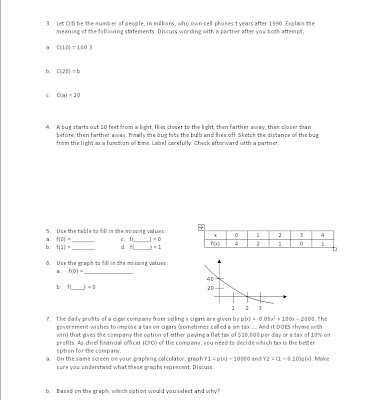 We "finished" our first "fake week back" at school. And by finished I mean that I'm going in today to continue to get ready for the students' first day on Monday. Things are mostly done, but I still have to make copies and finalize my decision on the first day activity for 2 classes.

I THOUGHT I had a general plan of what to do, but then my friend/dept. chair throws THIS book at me. Oy! There are some great things in there, and once I finally adjust the idea of my geometry day plan and my precal plan, I'll share.

Which brings up another thing that was happening as I planned. I don't know if it's past experience or other reasons for the hesitation, but I printed things out: syllabus, autobiography, seating chart plan, etc. and then I hesitated on making my final copies and getting it done. I guess I've done that enough and made tons of copies, and then realized that it wasn't JUST right or JUST what I wanted. Or maybe I just like the thrill of the last minute. Hmmmm. Anyway, it worked out well this time, because, YES I had to alter the syllabus, YES I had to alter the seating chart (yay! largest class currently is 26 and not 30), YES I totally am revamping my 1st day activity.

Which finally brings me to another funny saying I've seen lately: I have CDO. It's like OCD, but with the letters in alphabetical order - like they're supposed to be.
Posted by Shireen Dadmehr at 10:08 AM 1 comment:

Last Friday Before the "Fake" 1st Week of School

To relieve my bum's fascination with sitting and surfing on the computer all the time (it's really talented), I went in to school every day this week for a wee bit and unpacked and decided on desk structure (30 kids! Woot!) and stuff. You can see I'm still not done, but I've made headway, and my butt thanks me for actually walking around. You're welcome, bane of my rear.

Here are the unpacked boxes SO FAR: 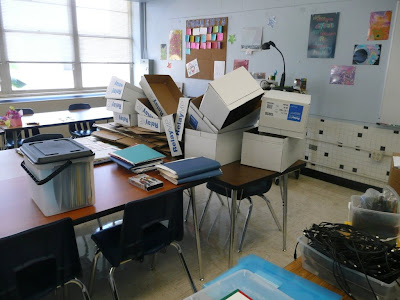 Here is what I'm trying out. Two students per table. Long rows. No extra room. Oh! and look! More schtuff to put away: 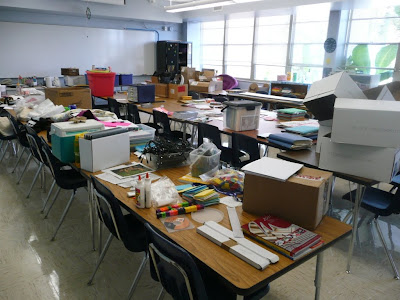 I'm trying to be more organized this year. I tried to put myself on a pen diet last year. NO MORE PEN BUYING. Apparently, my fascination with the show, "Hoarders", .... hmmmm, a little sensitive? 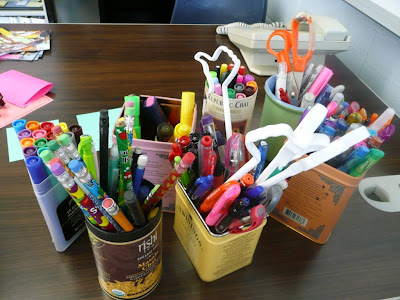 What's this? More hoarding tendencies? And I didn't even buy any pens or stickies this year. Yet. 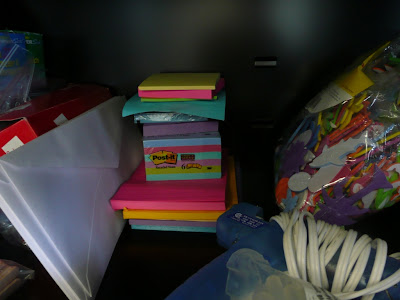 This made me giggle. I don't know if it makes me feel super old or super young or what. I'm FaceBook "friends" with several former students. Most of the time it's okay, but sometimes I have to hide all the posts from a particular ex-student because I don't want to know how much they drank or did other things. That's about 1% of them. The rest are just fun to see grow up and explore and get jobs and live.

Anyway, this student graduated HS about 2007, so maybe he's graduated from college right now and roughly 22 years old. His post was:

Is it just me or is the crap that kids are watching now a days really really suck?? I mean what happened to the good stuff??

Hah! "Kids these days"! Does he feel like an old man?
Posted by Shireen Dadmehr at 9:03 AM 2 comments:

I couldn't let it go, and it kept bothering me for a variety of reasons. So I just sent the following e-mail to the person mentioned in my last post.

I was just going to let this go, but it's been really bothering me since last Saturday night at the banquet when you made your extremely offensive remark against a person that happens not to be white.

One, I'm saddened that you think it's okay to blurt such stuff out in public (let alone think it), and two, I'm insulted that you think I must be of a like mind. I'm not, and I don't want you to harbor the impression in the future that I think like you apparently do.

At least I feel better about taking some action.

Okay, back to math ..... I've heard through the grapevine I may have a class of 30 students. Oooh! Now I know (sadly) that this may seem like a nonevent to others, but in a classroom where I'm to use those long tables as "desks" as opposed to actual desks, it's a tight squeeze. It's going to be a cozy year.
Posted by Shireen Dadmehr at 8:03 AM 6 comments:

Anatomy of a Racist Encounter

You attend a 3-day, 10th annual event because of your husband. You see people you only see once a year, and some people that you see throughout the year. You have nice conversations about a variety of things with a variety of people. You talk with a 78 year old man, CI, about many things, and a couple of times he makes slightly in-poor-taste remarks about people of different ethnicities. You scrunch up your face to show distaste, and he backtracks and conversation goes on. You think to yourself, well, he's of a "generation".

You are at a final-evening banquet sitting with 3 people you see once a year, one of whom you've had good conversations with for 2 days, let's call him DD. The conversation turns to politics - local Texas small town mostly. There are big drought issues and land issues and two of the locals don't agree with how the city has decided to deal with things, and they start in with, "once you become a politician, it seems you become an expert in everything you know nothing about."

Then the 3rd person, DD, interjects an awful racist remark, "oh, like that ____ ____ ____ ____ over in the White House." The other two don't allude to DD's statement and just keep talking. You're stunned into shocked silence and not quick on your feet and still processing the fact that this person has literally let his racism hang out in public airing just like that. The conversation has continued. You're still stunned and really uncomfortable and want to say something, but don't know how or what or with what tone. You're angry with him, and you're angry with yourself for staying quiet. Isn't that the same as pretending what he said was okay? Doesn't that give him another vote of confidence that other people think like he does? You excuse yourself and don't return to the table. The evening ends.

And here's the thing. Now you have one more chink in your armor of trusting that people that you meet and that seem nice really ARE nice. That most everyone you meet that SEEMS human judges others on their character first/mostly and not on their race/sexual orientation/wage-earning. And you wonder when it will come out when meeting new people or talking with people you've known for a while. And what about the other 2 people at the table? Did they think the same way as DD because they didn't say anything? Do I have to wonder about them? Or were they flabbergasted like I was and are wondering the same about me?

And mostly you're still upset with yourself for letting it slide at the time and not knowing the right thing to say and the right tone, so that the person knows that he's offensive, and it is not okay and beneath his humanity. You don't think you can change his views, but you think that you should speak up. You keep thinking about it. You hope you come up with a phrase or two that will be on the tip of your tongue next time. But hopefully there won't be a next time.
Posted by Shireen Dadmehr at 9:44 PM 2 comments:

One of my goals ("someday") is to be fluent enough in at least 2 languages (ideally tons, but I could start with two). To that end, I dabble here and there and practice. I downloaded (when they were still free AGES ago) the "Learning Spanish Like Crazy" and "Learning Italian Like Crazy" CDs and listen to them in my car. I like both, and I'm pleased with the Spanish one because it's Latin American Spanish which is more relevant for me.

Apparently, some of my students think I know 5 or 6 languages (or maybe they're just humoring me) because sometimes I'll count in Japanese or say a word in German or such just to break things up. If they ask, I tell them how many I've "learned" in the past (in order: English, Farsi, German, Russian, Spanish, French, Japanese, Italian), and I also tell them how many I'm fluent in now (1). Go English!

Let's not fool anyone here. Maybe there's some segment of my brain that remembers these things, but those foreign words/phrases are not making that trip to my mouth. Anyway, as I was surfing the web today and went to the BBC site, I found THIS! Holy cow. There are videos and little dialogs and tests and all sorts of fun things.

I browsed through the French test, and got one wrong, and they linked me to these possible sites. I liked the Ma France one. Oh oh! more things to distract me from doing work.
Posted by Shireen Dadmehr at 1:29 PM 4 comments: