My students are still working on their Line Project, and I'm glad I assigned it because various things have come up that I think are good learning experiences for them and for me. I had separated their completion of the project into 3 successive class periods, and for the 1st one they had to turn in a set of data points and a computer-generated scatter plot to show the linear correlation. Well!

Most kids were fine, but others had a variety of issues:
* "The spreadsheet won't make a scatter plot of my data!" (the student was entering data of height vs. weight, and the heights were typed in as 4ft 5in, 4ft 6in, ...)
* "Here's my data ... SEE! Linear" (the set of points was EXACTLY linear since the student found a site that said that every 1 second ___ kids drop out of school, and the student had used that to create 5 coordinate points)

The 2nd class period, they had to turn in their own hand-created scatter plot and best fit line and equation and idea for a prediction using their line equation. Issues:
* Some kids used rise/run to calculate their slope, but the scale of their graph wasn't in "1's".
* Some prediction ideas were: I predict the cost of a loaf of bread will rise 31 cents every 7 years (they used their slope instead of their equation)
* Some just connected the data points, forgetting the example we worked on in class for best-fit line.

And so on. This seems to have taken them out of their comfort zone of how our math class has been going, so I'm glad they're being "mathematicians in action" and learning extra skills. I'm also glad I broke it up into 3 days of checkpoints since I'm guessing I saved myself (and them) the agony of incorrect or NO final products. While I was walking around critiquing their graphs this past class, I gave them THIS to work on.

On a side note, after my hectic week of various extra tasks added on to the already busy schedule, I went out for drinks with my friend, and we had an interesting discussion about the difference between "unethical" and "immoral". What types of things would fall into each separate category? Would some things be both? What's the distinguishing characteristics of something that is one or the other?
Posted by Shireen Dadmehr at 6:41 AM 1 comment:

We still have to talk about parallel and perpendicular lines, but soon we'll move on to systems of equations. Before we do that, I thought that this would be the perfect time to assign a line project to my students. In all their later topics and math courses, lines will just be an aside where it's already assumed they have learned about them.

We had a discussion about positive and negative linear correlation and no correlation and correlation that is not linear. We went through the process of creating best fit lines and using that line to make a prediction for another point that is not represented by your data. Then I discussed that in real life, people collect data, and if they all fell on a straight line, the mathematicians/scientists would faint from the rareness of this occurrence, and that usually, if the data seems to be linear, it'll look like our scatter plots that have a linear correlation, and THAT'S how this is used in real life. People make a model and then use that model to make predictions.

Then I assigned this project that I will collect in a succession of 3 class periods. I already have had one student send me her data that was interesting. She found information about teacher pay from the 40's to the 2000's, and you can see that it looks linear until about 1980, and then there's a BIG leap of the points and then it looks linear again. After a back and forth e-mail discussion, she found that some site stated that there was a 400% increase in pay in 1980 .... hmmm, haven't verified that, but I remember some of my older teacher friends mentioning their super low pay in the 70's.
Posted by Shireen Dadmehr at 9:33 AM 6 comments: 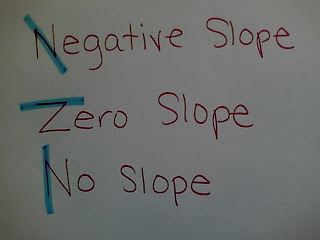 I went to Chicago for the nice 3-day weekend, and had a fun time walking around and people watching and freezing and sight-seeing. Here's the cool Water Tower Building: 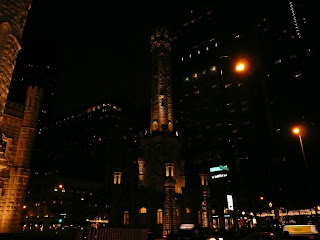 This is "The Bean" in Millennium Park. 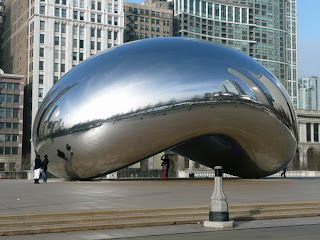 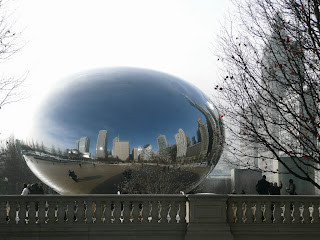 This is a river cutting through town and gives a nice idea of how cold it was: 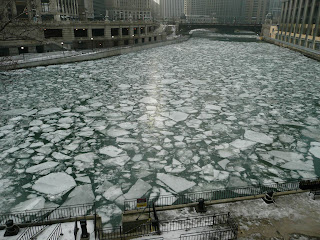 I loved the ease of the subway (CTA) system and my old-styled hotel (thank you, Expedia.com and yelp.com reviewers). I loved trying out their many vegetarian restaurants and knit shops and independent bookstores (thanks again yelp.com reviewers). This will tide me over until my next adventure.
Posted by Shireen Dadmehr at 9:16 PM No comments:

Yesterday at the start of geometry class I had the homework answers projected from the document camera, and was silently reviewing in my mind what we would be doing that day while my students checked their answers. I was ready to perfunctorily ask if they had any questions before we moved on to "the real learning". Okay, I'm not that robotic, but on hindsight, that's what it feels like because I almost missed a great learning moment.

On one particular question a bunch of students raised their hands. The question was something to the effect of: In a pentagon, the angles are consecutive multiples of 4. Find the measure of each angle. Instead of simply putting up the answer, I put my work down also since I thought there would be several confused students that would want it broken down: 4x + 4(x+1) + 4(x+2) + 4(x+3)+ 4(x+4) = 540 and then went from there.

The students with their raised hands weren't confused, they were chomping at the bit to show how they did the problem. Oh my goodness were there some clever kiddies there. They love to come up to the overhead and present (note to self: stop being a projector hog), and one by one they showed us what they did.

I was very impressed and humbly reminded that there are teaching moments quite available to me even when I'm not "teaching".
Posted by Shireen Dadmehr at 4:42 AM 4 comments:

As school started back up again, in algebra 1 we started our unit on equations of lines by talking about rates of change. Last year I just jumped right into slope first, and verbally mentioned some applications (if I remember correctly), but this year I thought I'd give them a context first. I started with a worksheet on rates of change and had them work through the first 2 problems with not much prompting. Then we discussed their answers. I made sure they used units. I made sure we saw ALL ways of writing the numbers. My classes (everyone's?) seem unsure that 9/4 and 2.25 and 2 1/4 can all be correct answers. They still look at me like they don't QUITE believe I'm not pulling a fast one on them.

Then they did the next two, and we discussed, and so on. I made sure to mix up the units, I have some with negative rates of change on the back. After a few, if it didn't come up, I discussed and made them write their calculations on the side as (y2-y1)/(x2-x1) using the appropriate numbers. If it didn't come up, I made sure to investigate what would happen if you used different points or a different order.

In my block class, we had just enough time to do this and then to have a discussion about rates of change and slope and how they're the same (barring units).

I'm thinking this went well because on the second day, when we discussed rise/run and started graphs to y=mx+b equations, they were pretty good and quick on calculating slope. Also, when I stepped back and asked them to identify positive and negative slopes, they had a picture of water levels increasing or decreasing and were pretty accurate.

Oh, one funny thing. I like to give them memory tools to keep things straight, and on "rise over run", I said, well what goes on top? the y's, and y's rhymes with rise. Then I told them I couldn't think of a memory tool that links run with x's, so I put it to them. Maybe these have already been done before, but I forgot, so I really liked some of the ones my kids came up with:

you run from your ex
you run from T-rex
you run cross country (x)
you run on a flat surface, and x is on the horizontal axis.
Posted by Shireen Dadmehr at 9:11 AM 1 comment:

I got a much-needed laugh today from a student. In my quest to drink more water and to stay caffeinated, I bring two 1-liter bottles of water to school every day. One (the BLUE one) I use with my electric water boiler to make tea (for normal days where you got enough sleep) or with my single-serving coffee maker to make hazelnut coffee (for the oh my god wake me up days). This water allows me 2 large (20 oz) cups of hot beverage (and I might add that it's very hard to find good, 20 oz reusable hot beverage cups. Thank you Starbucks). Add a little non-sugared soy milk and I'm in heaven. The other bottle (the YELLOW one) is to just drink straight. Of course there's the bathroom vs. class time issue, so usually I drink 1/2 of it during lunch time, and then the other half at the end of the work day.

Today, I had a mixture of chalk or dust in the throat and/or an on-coming cold and/or allergies, and I desperately needed a sip of water while I was teaching, so that I could continue without turning into a sputtering mess. I did something I'd apparently never done in class before. I got the yellow water bottle and took a few sips.

A girl looks at me for a bit and then says, "why would anyone drink water out of a yellow water bottle?"

After I finished laughing, I came back with, "I'm recycling". Ew.
Posted by Shireen Dadmehr at 8:52 PM No comments: