Since I was testing in another class the other day and was BORED from not chatting with kids and teaching, I had some time to prepare more than an hour in advance for teaching precalculus. I tried 2 new things this year to teach radians, and I think they're keepers for me.

We talked about how we're human, and it will be off, but we noticed the numbers were similar. Here's the page of my notes. 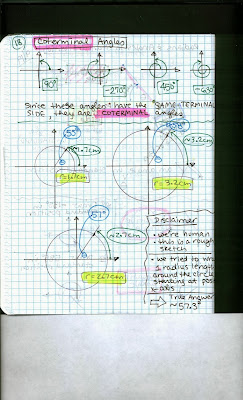 The next thing that worked was a table. I made them create a table with 3 columns, angle in standard position, degree measure, radian measure. One row at a time, I would give them one of the values, and they had to figure out the other two, and then we'd discuss it and their strategies. The highlighted portion is what was given to them. 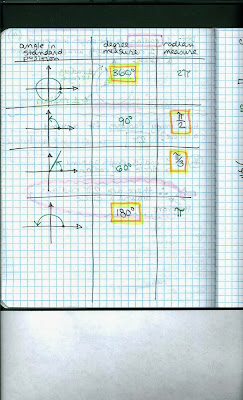 I liked this because it's all ordered in one table, and they can absorb it and see connections and such as opposed to my last year's notes where I sloppily just did a few around the page and put all the information on the graph.

Posted by Shireen Dadmehr at 6:14 PM