Today my precalculus students were starting their journey of being able to quickly visualize the "special triangle" standard angles by matching 3 sets of things: angles in radians, angles in degrees, and graphical representation of the angle in standard position.

About 7 years ago or so I first did this activity. And in my most-likely last-minute planning that year, I didn't have baggies to store the 36 cards, so I made up something like this: 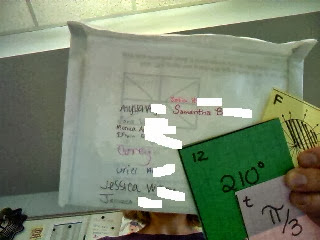 Okay, exactly this, because this is the actual "envelope" where the students would store their cards. I folded up a piece of scratch paper and bent in the sides and shoved the 36 colored cards in the packet. That year and that school I thought that kids would try to be "funny" and maybe take out one of the cards, so that the next class would not have a matching set. Who's the jerk cynical teacher that doesn't trust their students? ME!

Anyway, then it became a thing year to year and class period to class period that they would sign their name to the envelope. It was kind of fun to read over the names each year and see if I remembered the students.

Anyway, flash forward to this year. Different school from that first year, and about 7 or so years later. One student when she was signing the envelope said, "hey, my step-aunt's name is on here". I asked if she went to that school I taught at (since maybe it was just a similar name), and she said she did. Fun Coincidence! Or a case of .... look how old you are, you taught my aunt!
Posted by Shireen Dadmehr at 5:01 PM