Yes, the students remember ultimately, but as I was looking over my old files this year to do it again, things just didn't sit right ... or I was in the mood for a change ... or I'm a different person now, and I want to approach it differently.

I hit upon the following method, and I think I like it the best (ask me what I think next time). Here are things I like about it: it's not talk, talk, talk. It's not, "let's do it all theoretically and then POOF here's the formula." It's not, "let's all explore a different polygon by drawing and measuring and seeing what happens and there'll be human error, but we'll hand wave that away." It's pretty efficient. It's different from what I usually do, so it'll stick in MY students' minds (hopefully).

I had everyone get a piece of colored paper and fold it in 4ths and cut the 4 separate rectangles. Then on one rectangle, I had them draw a heptagon (we drew a light circle, put 7 dots on it, and connected the dots). We took a colored marker to the border of the heptagon and made sure that some color was on the interior. We drew diagonals from one vertex. We cut out the heptagon. Then we cut the triangles out.

Then I said, so what we want to explore is if I had asked you to measure all the interior angles and add them up what would you get. So now look at what we have done, and see if you can figure out the answer and then ALSO figure out why I asked you to do these particular tasks.

Then I waited and eavesdropped. Then I asked a kid to explain. Then I had them tape this into their composition books to look something like this: 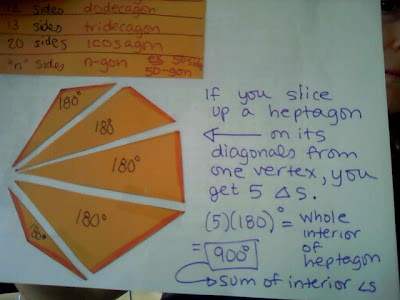 Then (after some other polygon stuff), on another piece of the colored paper, I had them draw an octagon but extend the sides to show the exterior angles. Before I had them do the following thing, I had them take thumb votes on the scenario, "as the number of sides increases, what do you think happens to the sum of the exterior angles as shown: thumbs up for increases, down for decreases, sideways for stays the same, or open palm for it depends on other factors." They thought and voted. Then we did.... 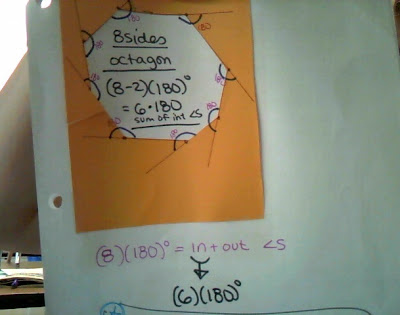 Then as always I ran out of time and was rushed and couldn't do any practice problems, so my resolution of stopping class 1 minute before the bell so they could pack up was not put into place today!
Posted by Shireen Dadmehr at 7:38 PM