At the beginning of the year I decided to have my 10th graders be guinea pigs with a retesting scheme. I had read many books and blogs over the summer and reflected on learning, and finally settled on something I was willing to try. I discussed it with my students and with my AP, and had my 1st test ... my first test that was right before the progress reports went out ... my first test in which more than 60-70% of my students ended up with a failing grade for the progress reports ... my first test in which I lost sleep afterward trying to figure out a way to stop the rush of panicked angry parent phone calls and student tears.

Here's how I set up my first test. I separated it into 5 sections, and each section was worth 10 points (no matter how many problems per section). The concepts were
A. matching geometry diagrams of lines points rays to notation
B. using the definition of distance to find coordinates of points on a number line
C. segment addition postulate
D. T/F & A/S/N on visualizing geometry
E. naming conventions of points lines planes

I was firm with myself in grading: have they convinced me of their knowledge? and/or am I just being nice "because they tried". I was firm. There were MANY zeros per section. There was no final TOTAL grade, just 5 grades entered into my gradebook.

I sent home the following letter: 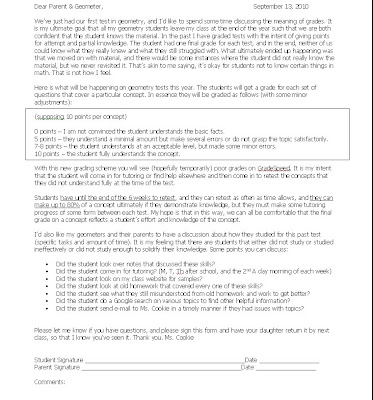 There were 3 weeks until the end of the grading period. Students started to slowly trickle in after school and during lunch to study with me and to retest. I made hand printed/copied versions daily of new tests for each section (there were only 2 problems average per section ... except matching which had 6 pictures and 8 notations ... and T/F which had 5 questions). I started to get worried because there were still some students that never talked to me and never came in.

Flash forward to the 2nd to last day of the 6 weeks. An AP e-mail reminder of calling parents for potentially failing students prompted me to send home a generic e-mail (I do NOT like phone calls: they take too long and are inefficient and I have to talk to people :o ). I sent the e-mail to the parent, student, and my AP. This got a majority of the laggers to come in on the last day.

Final tally: only 1-2 students never made the effort to improve their grades out of about 50 students.

I'm a grudging "retest" convert ... or SBG as it seems to be called around these parts. It's a ton more work, but I've had students thank me for allowing them to retest and learn. My AP likes it, and she mentioned that her daughter who goes to another high school in town has a math teacher doing the same thing. ... I just gave my 2nd geometry test Friday ... bring ON the RETESTERS.
Posted by Shireen Dadmehr at 11:19 AM