As I still have momentum from the previous year, I thought I'd get some ideas down for next year. I believe I'm teaching 2 levels of geometry (in addition to the PLTW IED course). I know how hard it is for kids to get up to speed with the flow proofs we teach, so I thought I'd scaffold it more this year, and potentially start with the following idea: 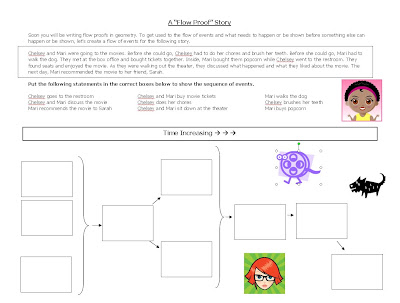 After a few (2?) of these, I'd try to incorporate a math story; then take away the "skeleton" at the bottom of the page for another story (but keep the statements), so they had to create the flow. Then start taking away more and more and finally bringing it to just a geometry problem statement. I'll have to flesh it out more, but that's the seed of my idea.

I like the flow proof style instead of the 2-column proof because there is a visual connection between what follows from what. I also like teaching proofs because it's a challenge for the kids and stretches their brains. It's also the first time (only time?) they see what it means to actually prove something instead of just give a convincing argument.
Posted by Shireen Dadmehr at 9:10 AM