I gave the following 2 sets of questions on my algebra 1 final (click on it to enlarge): 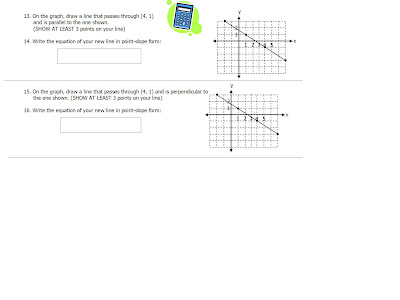 For 13 & 14, they were given a line and were to draw a parallel line going through (4,1) then give me the equation in point-slope form. For these 2 questions, people generally did fine.

For 15 & 16, I had the same original line drawn, and they were supposed to draw the perpendicular line through (4,1) and then give the equation in point-slope form. This is the set of problems they had problems with.

I thought I was giving them a gentle teacher nudge by having them draw the picture before they wrote the equation. The original slope is -2/3. Holy Moly. So many students thought NOTHING of the fact that the line they drew was NOT perpendicular looking. They INSISTED the slope of the perpendicular line had to be 2/3, and by Golly, that's the line they drew. 90 degrees? eh!

Note to self, when I teach algebra 1 again, I have to do more of this type of problem before we get to finals. I never did do the drawing thing in conjunction with just the "what's the slope/equation/etc of the perpendicular line to ..." type of question. Apparently, I should have.

On a positive note, I'll be teaching them geometry next year, so guess what we'll be "reviewing".
Posted by Shireen Dadmehr at 4:34 PM