I'm on my quest to try different things for the Trigonometric Identities unit. They explored last class, and today I wanted to get them started on simplifying various trig expressions using identities. Here's what I did. I made this set of 2 sheets for every student, put it on colored paper, and then made them cut them up (my first class) when they started. 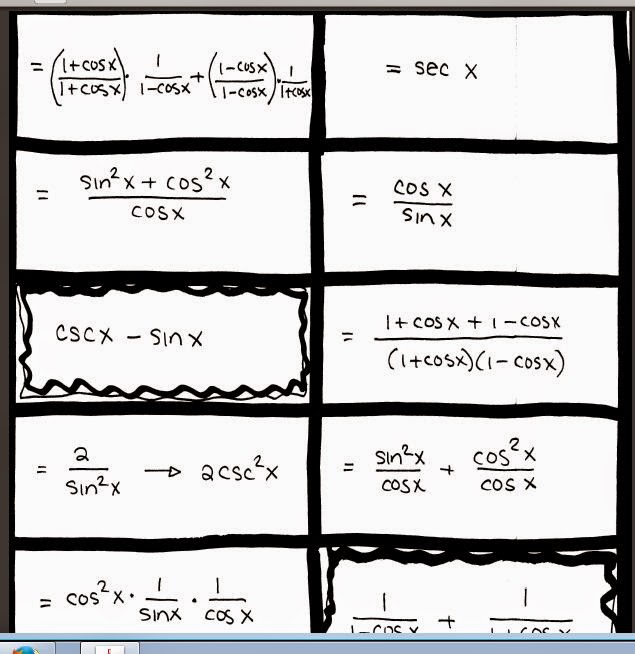 They're mixed up on the sheets, and there are FOUR total problems that start with the "squiggly" boxes, but I didn't tell them that first. I said they should look for 2 cards that pair up in such a way that they are ONE step away from each other either by an algebra law or by an identity. I did one example with them and took questions. Then they were on their way. 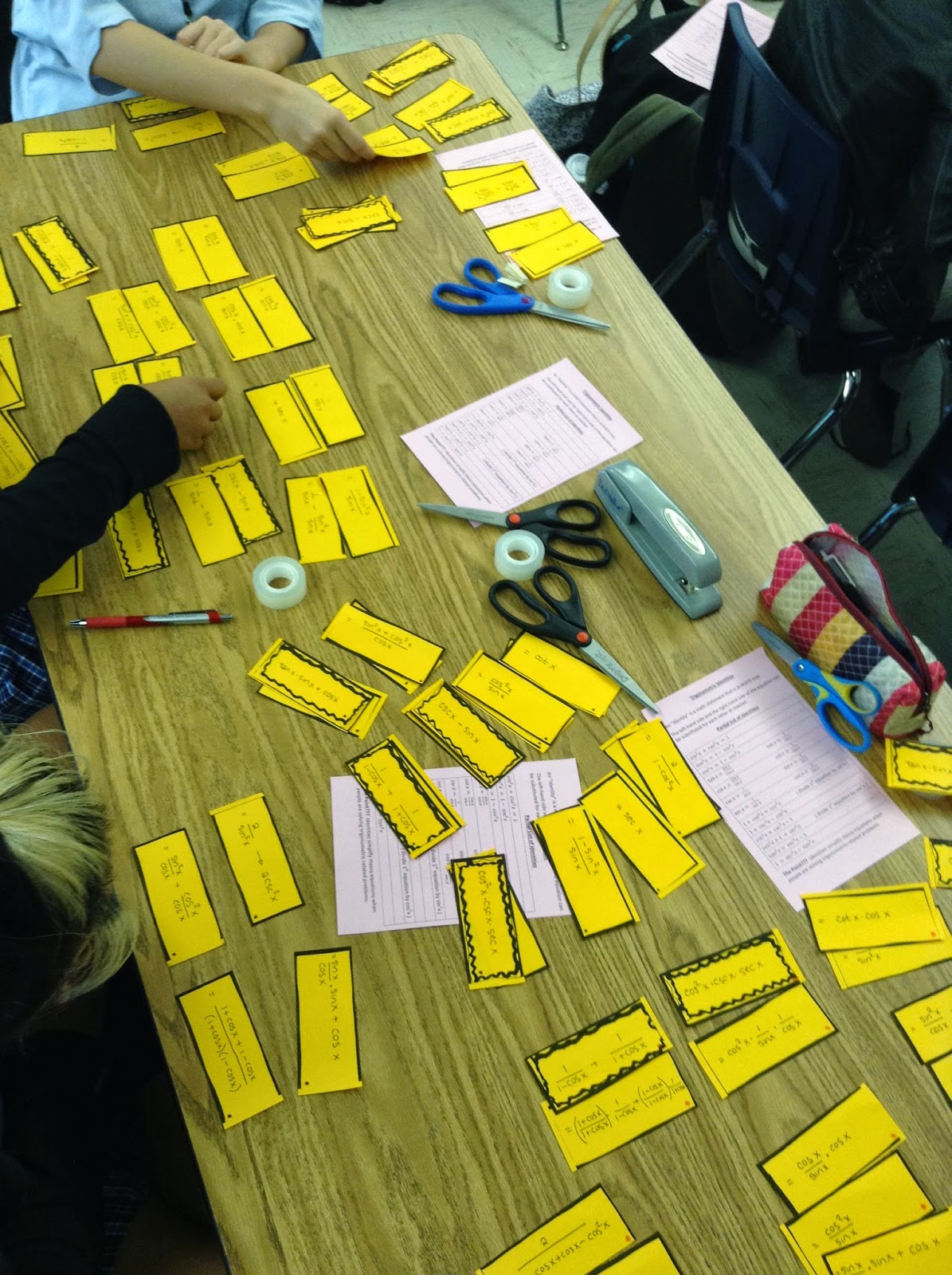 Since they sit at tables, and I didn't want to do different colors of sheets of paper (though I guess I could have), I had them draw dots in different colored pens (one per set) at the bottom right corner of their cards to avoid mix up.

Once they got as many pairs as they could, and I mentioned that depending on a variety of things they may not get pairs. Then I said they could try to find a "triple" pair for their remaining lone cards. After some time for this, then I asked if they can "pair up" the pairs to get a set of four .... Ultimately, I then said, or they noticed the "squiggle" cards, and we got to the point that there are FOUR separate problems, that each start with a squiggle card, so see if you can set up 4 different strings of "one steppers". 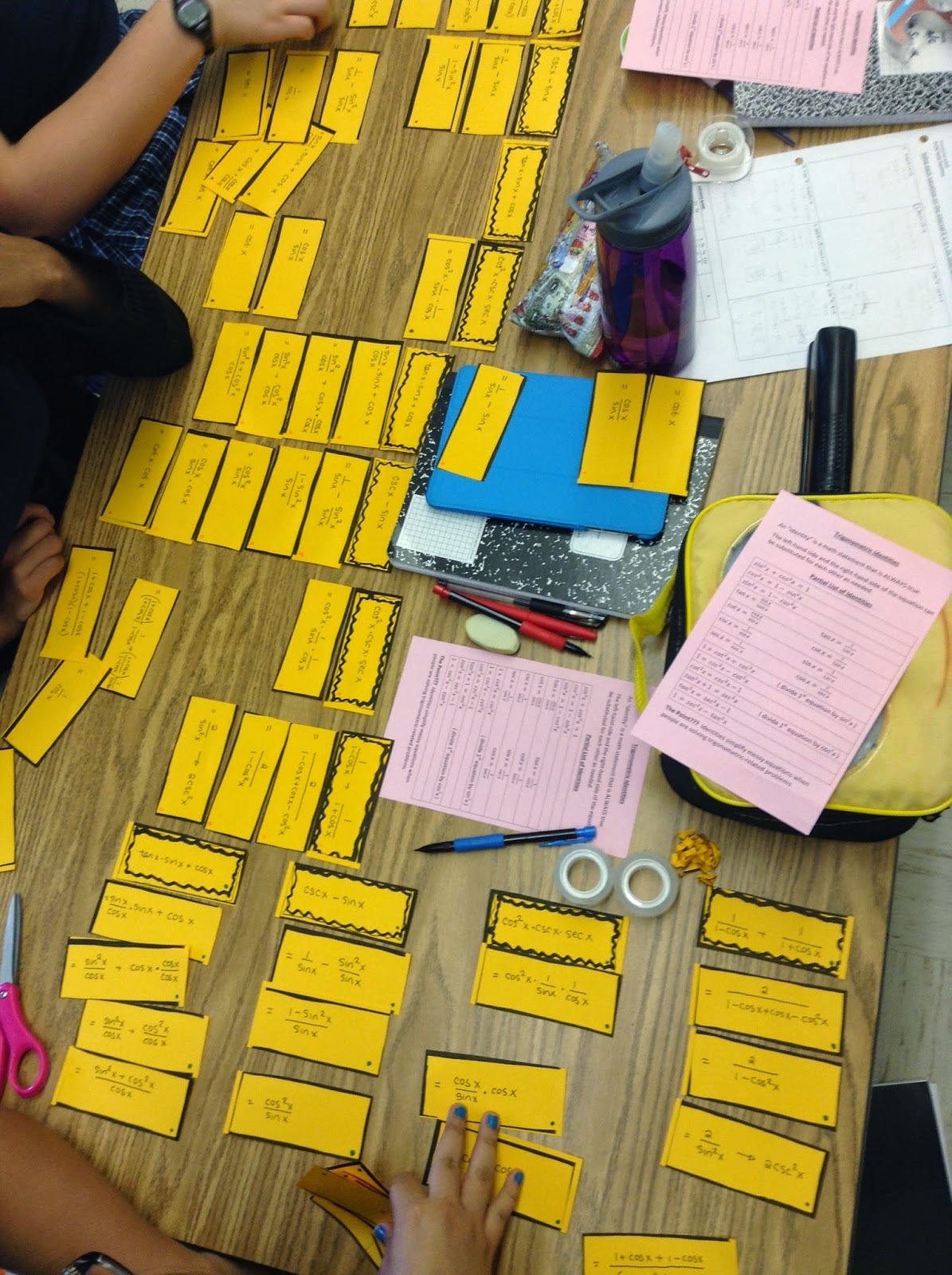 During all this they had their "notes" on pink paper that they were going to eventually tape in their notebooks. 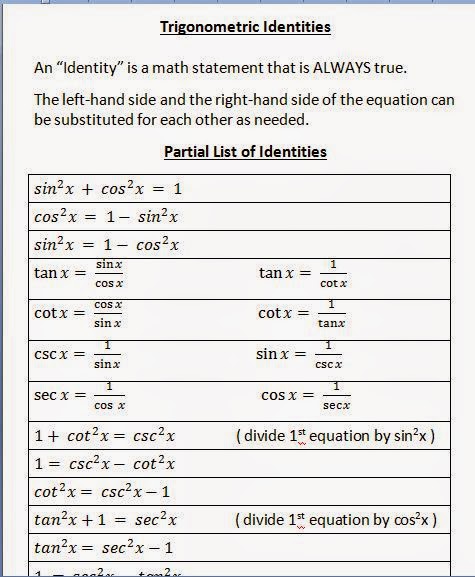 This all took about an hour or so to give them think time, and not everyone was successful with all of them, but we came together as a class and talked it out and got the 4 sets of problems, and celebrated any successes they had. Some problems had 7 steps, some 6, some 4. Then students taped the notes in their books, and we copied down 2 of the problems into their notes with "reasons". Hopefully, this will aid in their homework tonight where they have to do a string of one steps for each problem.
Posted by Shireen Dadmehr at 5:24 PM