Today in discussing Surface Area and Volume of 3D figures, I found out why textbooks choose to flatten out a cylinder in this way: as opposed to this way: 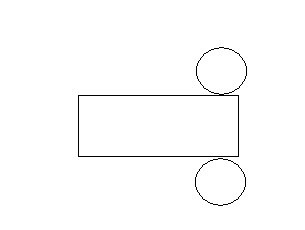 I was "not on the ball" when I was talking while simultaneously drawing it the "bad" way.

Second, I think I've jumped on the "be bossy in how you accept homework" wagon. I strongly suggested in the past that students show work neatly when they do their homework or tests. I never went further than that. I've seen too many instances now where they or I can't follow their work and when there's a mistake, you have to do extra work to track it down.

Because we're doing SA and LA and V of 3D figures today, and because I've seen so many mistakes in the past (and made them!) just from sloppiness, I laid down the law today. I had a small discussion about how they're not just doing a problem, but they're communicating a process. If the reader has to question you about what you're doing, then you've failed as a communicator. If you have to track down your work later on, and it takes you longer because you're jumping around all the work and can't follow the thought process, then you've failed as a communicator.

I'm making them write things DOWN IN COLUMNS and drawing and labeling neat pictures and indicating what they're finding for each step. With lots of (good-natured) grumbling (see, I'm in denial), they got to work and the beginnings of things looked promising.

I think I want to start off next year as BOSSY PANTS in this manner.

Woot! Who's going to be busy this summer? I'm going to miss the enthusiastic 8th and 9th graders, but I'll be excited to challenge my brain in a different way.

Posted by Shireen Dadmehr at 8:29 PM