We've reached one of my favorite units in geometry: logic. Today we just learned about conditionals, hypotheses, conclusions, and the 4 types of statements. I tried to be all interdisciplinary, and when we got to the part where the students had to i.d. the hypothesis and the conclusion, I said, "you know, it's just like science." Then everyone got the guess wrong. Well, duh, in science, the hypothesis reads something like, "if ____, then ____". So I revamped for my NEXT class, "you know how words have different meanings in different contexts? That's how it is with hypothesis here....". Here's the in-class sheet I used.

In fun news, here are my Lindy Hop aspirations. 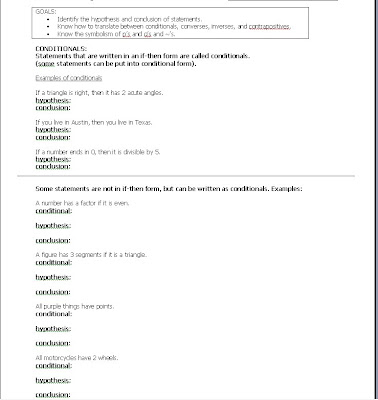 Posted by Shireen Dadmehr at 10:51 PM